Rene Renteria, 23, of Austin pleaded guilty to felony first-degree burglary of an occupied dwelling as part of a plea agreement on Friday in Mower County District Court. He initially pleaded not guilty to the charge on Oct. 5. 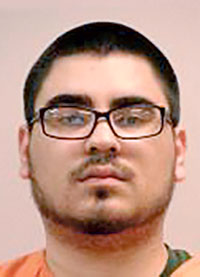 Charges of misdemeanor theft and fourth-degree criminal damage to property will be dropped at the sentencing.

Officers responded to a burglary call at 4:58 p.m. on Sept. 20 in the 700 block of Eighth Avenue Southeast. A woman at the residence told the officers she had made a deal via Facebook to sell a TV to another woman. She said the woman and Renteria came by, paid her half of the payment ($60), and took the TV.

She said she was taking a shower when she heard someone banging on the doors and windows. She called the police and went into her bedroom, at which point Renteria broke through the back door, grabbed the $60, and ran out the front door.

Renteria told police he noticed the TV was broken and was angry.

Renteria will be sentenced on June 1.

Matthew Carl Maxim Koch, 25, of Austin pleaded guilty to felony third-degree possession of 10 grams or more of a... read more