A man who was arrested after a woman noticed alleged fraudulent charges to her debit card account appeared on Tuesday in Mower County District Court. 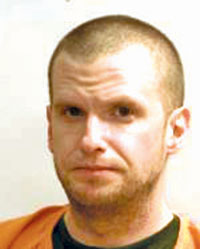 According to the court complaint, a woman met with a police officer on Dec. 6 at the Mower County Law Enforcement Center. She claimed that several unauthorized withdrawals and purchases had been made from her debit account and that she believed Tracy, who she called a “thief,” was behind them. She provided the officer with a bank statement that allegedly showed $741.96 in fraudulent transactions. The transactions included purchases at the Austin Walmart, Kwik Trip and Amazon.com as well as several ATM withdrawals from Kwik Trip.

The officer took photo stills from surveillance footage at Walmart and Kwik Trip at the time the transactions occurred, according to the complaint. The woman later saw the stills and identified Tracy.

The officer sent an administrative subpoena to Amazon.com concerning the purchase. Amazon.com allegedly provided Tracy’s name as the purchaser and allegedly listed his address in the 400 block of Third Avenue Southeast as the shipping address.

Tracy was arrested on Friday and allegedly told police the woman had given him her debit card and PIN to withdraw money for her.

He also allegedly said she allowed him to make the Amazon.com purchase with the agreement that he would pay her back. The woman disagreed and provided police with a recording of a conversation where she confronted him about the card.

On the recording, Tracy allegedly told her that he would tell the police she gave him the card to use.

Tracy will appear in court again on Jan. 29.

A LeRoy man on whose property authorities found a stolen forklift pleaded guilty to felony theft on Tuesday in Mower... read more