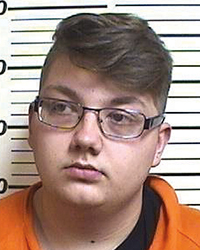 Anthony Joseph Shea, 18, of Cresco, Iowa, pleaded guilty to felony third-degree burglary as part of a plea agreement on Monday in Mower County District Court. He initially pleaded not guilty to the charge on Aug. 3.

Charges of felony second-degree burglary-possess tools and felony aiding/abetting first-degree criminal damage to property will be dropped at sentencing as part of the plea agreement.

Shea participated in an April 13 burglary at Lutheran Social Services of Minnesota in LeRoy. Several offices inside the building were burglarized and surveillance cameras were pulled down and disconnected. The NAPA Auto Parts next door. was also accessed

Surveillance video from LeRoy-Ostrander High School, which is next to NAPA, revealed three suspects in a dark sedan.

Howard County, Iowa, deputies arrested Shea on April 17 in connection to a burglary in their jurisdiction. On April 18, a Mower County detective reviewed Shea’s statement to the Howard County Sheriff’s Office, in which he admitted he was involved in the burglary at Lutheran Social Services. A Howard County deputy said Shea and two juvenile males also confessed to multiple area burglaries.

Felony third-degree burglary carries a maximum penalty of five years in prison and a $10,000 fine.

Shea will be sentenced on May 10.