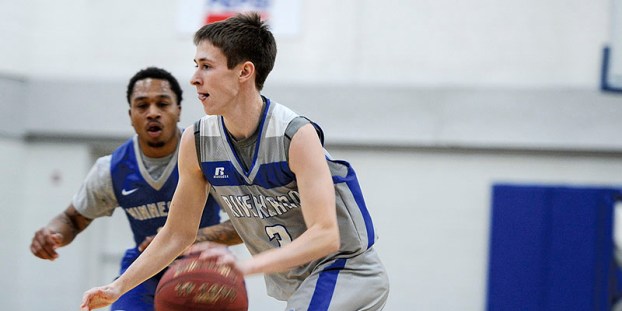 The Riverland Community College men’s basketball team rode a hot shooting performance from Southland grad James Landherr as the Blue Devils were open their conference season with an 80-74 win over Minnesota West in Riverland Gym Wednesday.

Landherr poured in a career-high 24 points as he connected on seven three-pointers for RCC (10-4 overall, 1-0 MCAC). Landherr’s final three-pointer iced the game as it put RCC up 75-64 late in the contest. 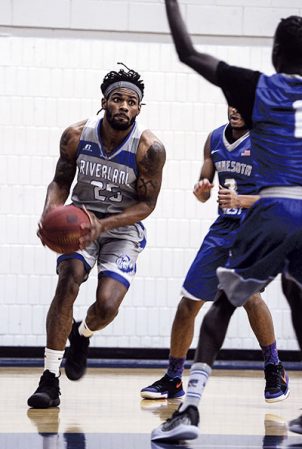 “It’s fun,” Landherr said. “They did a really good job of finding me and when you’re hitting shots, coach Hahn stresses finding the hot guy when they’re hitting shots. It just happened to be me tonight and who knows who it will be next game.”

After leading 31-25 at the half, Landherr sparked a Blue Devil run with back-to-back threes to put RCC up 54-34 with 13 minutes left in the game.

“James is a guy who’s had games like this before,” RCC head coach Derek Hahn said. “When he gets hot, he doesn’t need much of a look at it and he gets unconscious. He really got hot tonight.” 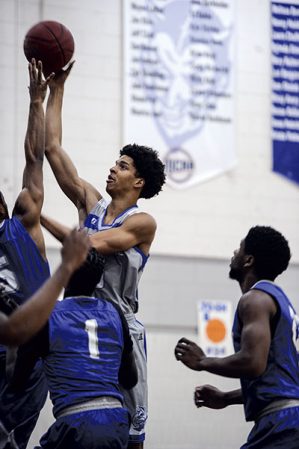 Riverland’s Octavein Johnson shoots inside against Minnesota West during the first half Wednesday night at Riverland Community College. Eric Johnson/photodesk@austindailyherald.com

Kwantez Simmons, who had 16 points and five rebounds, helped seal the game as he hit a hook shot and he came up with a breakaway jam in the closing minutes.

“We have to play as a team, trust in one another and play hard,” said Simmons, a freshman from Milwaukee, Wis. “Mostly we’ve got to trust each other. Tonight I really played my heart out and I try to play my heart out every game.”

RCC head coach Derek Hahn was happy to start the conference season with a win, but he would like to see his team play more consistently.

“When you get to conference schedule and win, that’s important,” Hahn said. “It was probably one of our worst performances of the season in terms of discipline. I’m going to chalk up to a little bit of nerves, but it was nice to see them respond and see them make some free throws at the end.”

Mower County roads to get attention; Sales tax enacted in 2017 to fund $6M in road projects