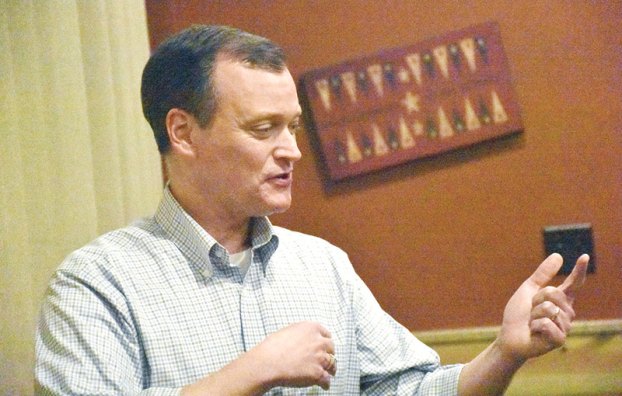 After talking to a gathering at Austin’s Pizza Ranch on Tuesday about things such as taxes, school choice, illegal immigrants, violent protesters, college loan debt, misguided bureaucracy, and Democrats obsessed with their “fringy issues,” Republican gubernatorial candidate Jeff Johnson ate pizza with staffers and a handful of folks who stayed behind. They continued to talk a little politics, but dinnertime discussion quickly turned to the Minnesota Vikings.

Johnson and the Viking fans commiserated about facing another devastating playoff loss.

Austin High School teacher Patty Mueller captured the exasperation by re-enacting her “They always do this!” moment when all appeared lost.

Johnson remembers putting his head in his hands, preparing to accept the inevitable, he said.

Then, receiver Stefon Diggs sprinted to the endzone for an improbable victory.

Johnson and certainly the majority of the 15 people who attended his campaign stop likely share this moment with even politically liberal Minnesotans. But, it would seem to end there.

Questions and comments from those in attendance at the event included standard conservative positions on government being too large and out of touch, Minnesota taxes being onerous, the need for school choice and need to reform overly generous welfare programs.

“I want to have the strongest safety net in the country,” Johnson said, “but we don’t need to go as far as we have gone because we just can’t keep up with this spending.”

One man asked whether Johnson would change Social Security. Johnson answered that, although it is a federal issue, Minnesota needs to eliminate its taxing of Social Security.

Early in his presentation, Johnson said his campaign is sharing a message of providing opportunity for all Minnesotans, and he told a story about meeting a woman, Rebecca, who disagreed with him on just about everything, but wants her daughter to have a better life than she has had.

Johnson said she told him that she had watched his video messages and, “‘I saw you talk about how you are not going to get distracted by politics and you want people to have a little more control over their lives and that it was most important to you that every single Minnesotan has opportunities for a better life’ .. she said ‘I actually believe that you meant that and that is all that matters to me.”

She said she would vote for him, he said.

“And the Democrats have become so obsessed with their fringy issues like protecting illegal immigrants or violent protesters; telling us what bathrooms to use; and I can go down the list. They are so obsessed with those issues that most Minnesotans don’t care about, especially struggling Minnesotans don’t care about them. They’ve gotten completely off track. But we can fix that.”

Asked by a student what makes him the strongest choice among the candidates seeking the Republican gubernatorial nomination, Johnson said he learned important lessons in his loss to popular incumbent Gov. Mark Dayton, including the need to pay better attention to turning out the  Republican base. He focused too much on gaining support of independents in that race he said.

He lost a narrow race to Dayton, and with this coming election being for an open gubernatorial seat, he is the strongest candidate and is a proven fundraiser, he said. Additionally, his campaign did not get any out-of-state funding, but he’s certain national conservative groups will help this time because of the Minnesota Democrats’ vulnerability.

The Republicans have a good chance of gaining control of the legislative and executive branches for the first time in modern history, he said.