Goetz is Austin School Board chairwoman again; Board debates, then approves $400 for its members

Austin School Board Chairwoman Angie Goetz will return to lead the group this year.

Goetz’s nomination was unopposed at the organizational meeting of the board on Thursday.

“I’m really honored that my cohorts would support me again to lead the school district,” Goetz said after the meeting.

Her new vice-chairwoman will be Carolyn Dube, succeeding Peggy Young in the spot. Young was elected board clerk and Kathy Green is the new treasurer. 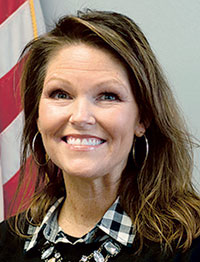 Don Leathers initiated the discussion, reminding fellow board members he had suggested a $400 increase a year ago “and I couldn’t even get a second.” He added the district will pay out $1.3 million in salary and benefit packages in the next two years, “and we can’t even give ourselves a $400 raise?”

Some noted Austin’s current pay for board members already compared favorably with other Big 9 schools.

Superintendent of Schools Dave Krenz said he knew “it’s tough to look at yourselves and give yourself a raise,” but even a conservative community would find a raise reasonable after almost 30 years.

Goetz said she could understand both sides of the issue. On the one hand, she did not  believe you served on the board for its salary.

“But we also want to think of our district as a leader,” she said, adding that an Austin increase might spur other districts to re-think their compensation to board members.

Although she voted against the raise, Dube said a stipend also might increase the number of those willing to serve on the board. If, for instance, the prospective board member had children, the stipend might help offset daycare costs.

In other organizational business, the board approved the Austin Daily Herald as the district’s legal newspaper.

Board member Dick Lees, however, said he thought the Post-Bulletin should be considered, since, he said, the paper “was back” in Austin. Board secretary Sharon Alms said no proposal was submitted by the other newspaper and if it did not have a permanent office in town, it would not be eligible as a legal paper. The Herald’s bid was 23 cents per word on legal copy.

The board meets for its regular monthly meeting at 5:30 p.m. Monday in the Austin City Hall chambers.