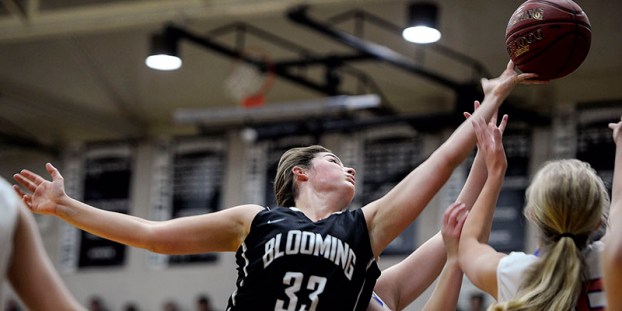 Blooming Prairie’s Megan Oswald reaches for a rebound in the first half against Southland in Blooming Prairie. Eric Johnson/photodesk@austindailyherald.com

BLOOMING PRAIRIE — The Awesome Blossoms came out of a two-week break with a lot of intensity as they used a strong first half effort to beat Southland 67-51 in BP Friday.

The Awesome Blossoms (7-2 overall) used their defensive pressure to force a bevy of Southland turnovers early on as BP jumped out to a 35-10 lead to start the game.

BP senior Ayren Ingvalson, who finished with six points, three rebounds, and four assists said BP had some solid practices over the break and that carried over to Friday’s effort. 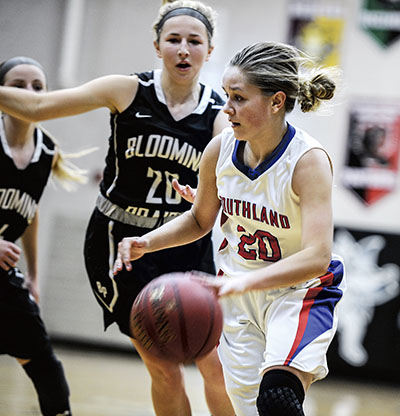 “We work really hard in practice, then when you push yourself in a game, that’s easier,” Ingvalson said.

Ingvalson and fellow seniors McKenna Hein, who had nine points and four steals, and Sam Wurst, who had 12 points and seven rebounds have had to step up as the main leaders for BP this season as the squad has a lot of underclassmen. BP head coach John Bruns said those players have done their job well.

“The girls have really come together well,” Bruns said. “We play three seniors and we don’t have any juniors in the program at all. The seniors have shown really good leadership and they’ve taken the younger girls under their wing and helped them along and helped them adjust to varsity speed and physicality.” 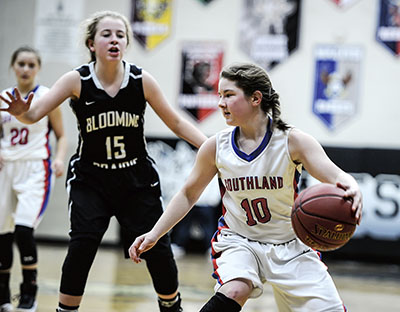 Southland’s Kayla Nelsen tracks down the ball in the corner during the first half against Blooming Prairie in Blooming Prairie. Eric Johnson/photodesk@austindailyherald.com

“We do a lot of stuff together [off the court] and our team is really close,” Hein said. “Our bench is our key. They tell us who to guard from the bench and they point out things.”

Southland (1-8 overall) was led by Jenna Bentzin, who had nine points and eight rebounds and McKendry Kennedy, who had eight points.

The Rebels trailed by as many as 30 before BP pulled its starters late in the game. 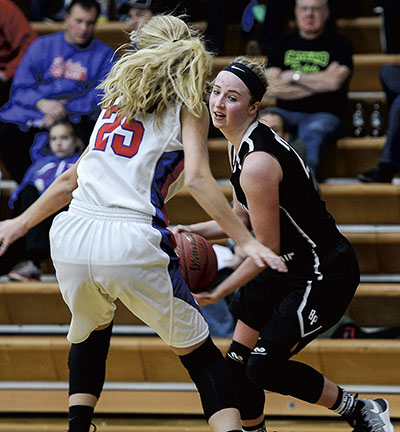 Blooming Prairie’s Sam Wurst begins to break against the defense of Southland’s Kelsey Mensink in the first half Friday night in Blooming Prairie. Eric Johnson/photodesk@austindailyherald.com

“We’ve got to grow up. We can’t turn the ball over that many times and then get back in transition slowly. They beat us back. Give [BP] a lot of credit, they played hard,” Southland head coach Dean Bendtsen said. “It really kills us when Brianna Johnson gets in foul trouble. She controls our defensive possessions and it really hurts us when she’s out of the lineup.” 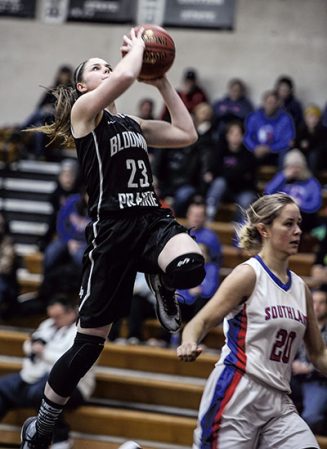 Blooming Prairie’s McKenna Hein heads up for a layup against Soutland in the first half Friday night in Blooming Prairie. Eric Johnson/photodesk@austindailyherald.com