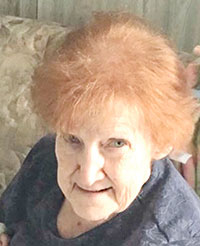 Dixie was born on April 17, 1937, in Austin to Richard and Frieda (Douglas) Downs and attended Austin Public Schools. Dixie married William Hanson on Nov. 17, 1956, in Chickasaw County, Iowa.  They made their home in Austin, where she was a homemaker and raised their nine children. Later, she worked in customer service at Walmart.

Dixie was a member of First United Methodist Church and she was active in the V.F.W. Ladies Auxiliary. She enjoyed playing Bingo and slots.

She was preceded in death by her parents; husband, William, in 1995; a grandson; four sisters; and a son-in-law, Robert King.

Funeral services will be held at 1 p.m. on Monday, Jan. 22, at Clasen-Jordan Mortuary with the Rev. Shari Mason officiating. Interment will be at Oakwood Cemetery. Visitation will be on Monday one hour before the service.