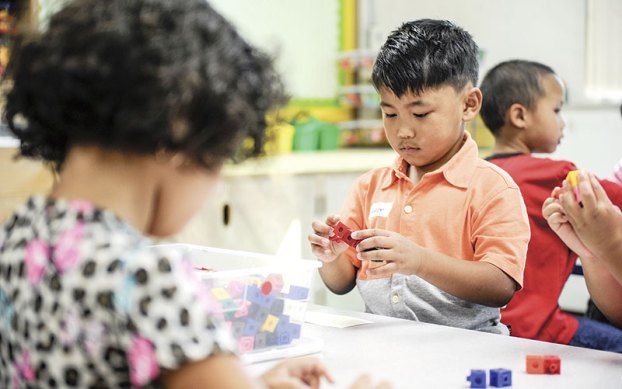 Woodson Kindergarten student Peter Shing works with some blocks during the first day of the 45/15 school year. Herald File Photo

District continues its study of a balanced calendar

The Austin School District will continue to study the potential for a new kind of school calendar after early responses in a survey and focus interviews showed interest in its use.

A calendar working group is expected to be reconvened and another survey might be taken, according to those leading the study.

A balanced calendar is one where students attend classes for 10 months that are spread out over the year, with a summer break no longer than eight weeks. Two to three breaks — called intercessions — are spread throughout the school year.

The traditional nine-month-in,12-weeks-off calendar, in place for many years, was created during a time when many students worked on family farms and needed to be home during the growing season, Krenz said.

Today, research has shown that breaks longer than eight weeks result in periods of regression, so that teachers regularly have to reteach information in the fall, when students return to classes.

Studies have also shown that achievement, discipline and teacher satisfaction all increase with the balanced calendar.

Information to date was gathered over a two-year period. During the 2014-2015 school year, a committee of community members researched the issue; during the next year, a feasibility committee worked to answer questions as to whether the community was ready to embrace the new calendar, and whether it could be done district-wide.

There were 1,252 who responded to a survey on the topic, said Rollie, and of those, 56 percent were parents. However, the demographic was almost entirely caucasian “which didn’t really represent our community,” she said.

The survey found 49 percent of respondents were in favor of a balanced calendar; 13 percent were neutral and 38 percent were opposed. Concern for extra-curriculars — specifically football practices — and interruption to family vacation and daycare schedules led the concerns.

According to focus interviews, concerns about the ability to retain a secondary job and complete maintenance work were expressed. Some bus drivers, for instance, will get another job over the summer months; when that time is reduced, getting another job is difficult.

The district has experience with a modified calendar. Sumner Elementary School and some sections of Woodson Kindergarten Center, established a 45-days-on, 15-days-off calendar in 2011, a type of balanced calendar that features a shortened summer break as well.

Still, said Krenz, while the support for the Sumner change was overwhelming — 90 percent of the respondents were in favor of it — the current survey raises questions.

“If we have 50 percent either neutral or against, it’s a different dynamic,” he said.

Albert Lea and Worthington were two other districts mentioned that are studying use of a balanced calendar. The Cambridge-Isanti School District has a middle school that uses the calendar.

Board member Kathy Green said she felt it important to keep the question, “Are we doing the best we can for kids?” at the forefront of all studies.

Krenz, board agree on new contract