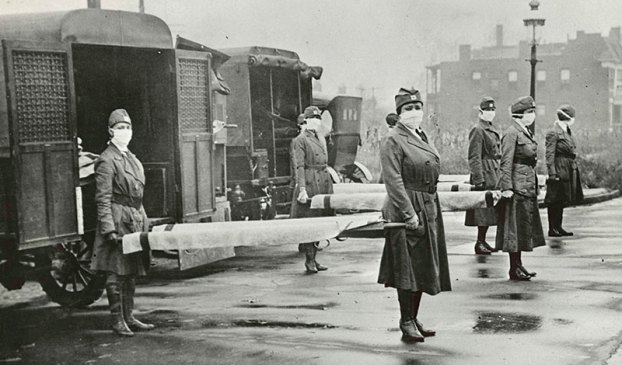 In a 10-month period between 1918 and 1919, it is estimated that 675,000 Americans died from an illness whose severity has not been witnessed since.

J. H. and Gertrude Skinner, publishers of the Austin Daily Herald and editors of the “Mower County in World War I,” reported that over 100 people from Mower County died in the scourge and over 7,000 were infected.

Statewide, 126,973 cases of the flu were reported by the State Board of Health, and 12,000 died. Even those are conservative numbers, since many physicians did not record or document the milder cases. Worldwide, it is estimated that 50 million died before the pandemic came to an end, in 1919. The scene at the height of the influenza outbreak at Camp Funston, part of Fort Riley, Kansas. Many believe the initial outbreak may have occurred in Kansas military training camps. Many Mower County soldiers died in camps like these, including Camp Grant in Rockford, Illinois, Camp Hancock, at Bismarck, North Dakota and Camp Cody, in Deming, New Mexico. National Archives and Records Administration

Everything about the deathly 1918 pandemic was at odds with what most thought they knew about influenza.

While the elderly and the youngest were most vulnerable in earlier outbreaks, this one seemed to target the most robust and healthy, with those between the ages of 20-40 years  the most susceptible. The 1918 flu struck swiftly in its second, more deadly wave: a person could fall ill in the morning and die in the afternoon.

Within hours of feeling the first symptoms of fever, and headache, victims’ faces would take on a bluish cast; they could cough so hard they could tear muscles. The influenza almost always resulted in pneumonia, attacking the lungs so severely so that people literally drowned in their own fluids.

Austin newspapers were peppered with items about those falling ill, starting with hardly a mention of the flu in mid-September 1918, to an explosion of obituaries a month later.

Perhaps the most cruelly affected were the boys who left town to fight in the Great War. The combination of close camp and troop ship quarters, and the age of the men, launched a march of death through the ranks.

For the vast majority of those from Mower County who died in the service, death came not from war, but from influenza. The training camps – Forrest, Grant, Oglethorpe and Cody were the most often mentioned in the local papers– were rife with the virus. At Camp Grant, near Rockford, Illinois, where several from Mower County trained, there were eight cases of the flu reported on Oct. 1, 1918; on Oct. 2, the number rose to 50 cases; on Oct. 3, there were 800, according to camp records. So bad was the death rate at Camp Grant that its commander killed himself, feeling personally responsible for not being able to stop the scourge that was killing his men. A New York police officer, outfitted with a mask, at the height of the Spanish influenza outbreak in 1918. National Archives and Record Administration.

Four Mower County soldiers died at Camp Grant, almost all in October. One was Harry John Mechenich, 22, who died Oct. 10. The Rose Creek boy, the papers reported, “was in the best of health when he left for the service with a splendid constitution. Only the dangers of the battle line was feared for him, yet he fell victim to an epidemic.”

Fellow Mower County soldier, 24-year-old Manley Osborn of Austin, died the same day at Camp Hancock. Two more local boys –Orval Blough, 27, of LeRoy, at Camp Grant, and J. W. Ball of Rose Creek, who was enrolled in the Student Army Training Corps at St. Olaf College in Northfield — died the next day. Almost all who fell from the virus died in the fall of 1918.

All the stories were heartbreaking, some particularly so. Arthur Christensen, 24, of Austin, died at Camp Hancock near Macon, Georgia, on Oct. 3; his brother-in-law, George Hansen, 25, and also from Austin, died the next day, in the same camp.

“The bodies were brought to Austin for burial and as was fitting, honors were paid to the two boys jointly,” reported the Herald editors. “With October’s blue vault above, in the fullness of the year, with the fallen leaves of unnumbered trees sounding the dirge of another season, as they rustled under foot, they gathered at the home of Martin Hanson, drawn together by old acquaintanceship, united by marriage, and by common sorrow.

“Neighbors and friends formed the procession that wended its way to the city (for the funeral) along roads that led past the gorgeous colored oakwoods, past the seared and browning fields, from which the grain had been taken.”

At the height of the virus, funerals became private by edict. The Oct. 9, 1918, issue of the Mower County Transcript-Republican provides information about the Spanish flu. A week after this article was published, the Austin Board of Health required that churches, theaters and other organizations suspend meetings and services until the pandemic had abated. School, however, was kept in session.

“The funerals of the boys who died in camp were private, only a firing squad and a bugler from Company C being permitted to attend besides the immediate family,” the Transcript-Republican reported.

On Oct. 17, 1918 — called “the cruelest month” for deaths during the 10-month siege — the Austin Board of Health ruled that churches and theatres, or other places where people gathered, would be off-limits until the danger had passed. The only exception, at least initially, was that schools were left open.

“Quite a number from the Valley attended a big Liberty Day celebration at Austin,” said one reporter, writing about the Root River Valley that fall. “The rest of us were threshing or had the flu.”

The flu, which came in three waves, finally left by the spring of 1919. Today, there are still questions as to what caused the deathly illness. Some have hypothesized that a mutated strain was created from an avian strain and human virus.

Doctor: Get the flu shot

Those who haven’t gotten a flu shot should consider it —  and the sooner the better.

This year’s flu is widespread and has “resulted in more hospitalizations and more deaths,” said Scherger. She said she has witnessed an uptick in just the last week.

This year’s flu vaccine, estimated to be about 30 percent effective, will still lessen the impact of symptoms and result in fewer hospitalizations, she said. The effectiveness of any vaccine against this year’s most dangerous of the strains, H3N2, a Type A strain, is difficult.

This flu, she said, affects all ages, and usually lasts three to seven days, with fever and cough. Anyone with a fever of 100.4 degrees or higher lasting more than five days, of if they feel dehydrated, should see a doctor. Particularly vulnerable are those with respiratory issues, or who are under the age of 2 and over the age of 65.

A flu shot still remains a good weapon to lessen impact – but since its antibodies take about two weeks after injection to maximize its effectiveness, “getting one sooner is better,” she said.

According to the Minnesota Department of Health, in the week ending Jan. 13, the flu has resulted in more than 2,300 hospitalizations, with most coming in the metropolitan area.

For more on the impact, go to: http://www.health.state.mn.us/divs/idepc/diseases/flu/stats/flustats2.pdf

(Sue Doocy of the Mower County Historical Society provided valuable materials and resources for the writing of this article, and we extend our thanks to her and the society for their help).