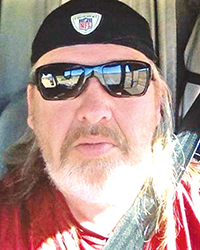 Bradley J. Graves was born on Dec. 10, 1958, to Donald and Marion (Selix) Graves in Austin, Minnesota. He grew up in Brownsdale, Minnesota, and graduated from Hayfield High School in 1977. On Dec. 31, 1977, Brad was united in marriage to Bernadine (Horkey) in Brownsdale. To this union, three children were born. Brad enlisted in the United States Army, where he served his country for 18 years. He did tours of duty in Germany, Korea, and was also stationed in Kentucky and Washington during his service. He was honorably discharged in 1995, and the family moved to the Albert Lea, Minnesota, area.

After his retirement, he drove his semi until the day of his passing. In his free time, Brad enjoyed watching NASCAR, Dale Earnhardt Sr. being his favorite driver. He also enjoyed following the Minnesota Vikings. Brad enjoyed taking his family on camping and fishing trips and going on many family vacations. Above all, Brad was a wonderful husband, father, and grandfather and loved spending time with his family. He had a big smile and was always willing to help his family before thinking of himself.

He is preceded in death by his parents, Donald and Marion; a sister, Donna Salisbury; and mother and father in-law, Robert and Donna Horkey.

Funeral services will be held at 1 p.m. on Wednesday, Jan. 17, 2018, at the Bonnerup Funeral Chapel in Albert Lea. Pastor Kaleb Hurley will officiate. Visitation will begin at 11:30 a.m. and continue until the time of the service on Wednesday. Interment will be in Graceland Cemetery.