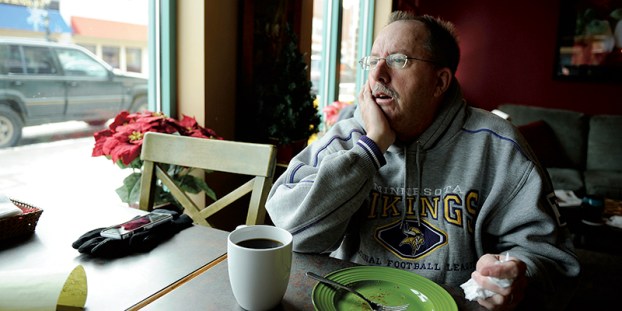 Retired Southland English teacher Tim Brennan talks about his career and love for plays at the Coffee House on Main recently. Eric Johnson/photodesk@austindailyherald.com

All the worlds a stage: Tim Brennan earns playwriting award

You wouldn’t think you could get a lot done in 10 minutes — but Tim J. Brennan can.

His play, “940 Feathers,” will be performed as part of the accompanying play festival, to be held in March in Waxhaw, N.C., and at the Diez Minutos Play Festival in San Miguel, New Mexico, this year.

Brennan, 60, is no stranger to seeing his plays performed on stage. Just this one play has been performed six times in the U.S. and in Mexico.

If you are unfamiliar with 10-minute plays, you’re not alone. While some theaters regularly have 10-minute play festivals – a good way to host several plays and authors  during an evening or weekend event – most people think of plays as one-acts or full, three-act performances. 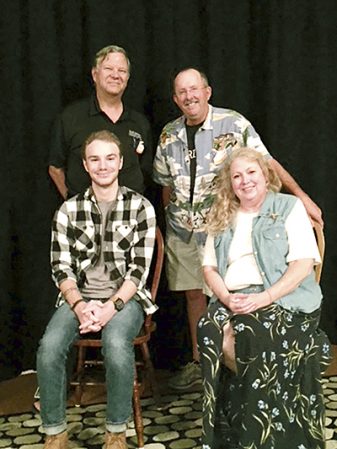 Brennan with the cast and director of “940 Feathers” in Gulf Shores, Alabama. Photo provided

“You can ‘drop in’ on a scene; you can start anywhere,” he said.

While it does have its challenges – all writing does – it fits his intention of capturing a moment in time.

His “940 Feathers,” a reference to the number of feathers on a hummingbird, centers on a woman struggling with the onset of Alzheimer’s disease.

The subject is precious to Brennan, whose father had the disease. His experience during that time was instrumental in writing “940 Feathers.”

He wrote his first play, “Bed Time Story,” out of frustration. He was increasingly concerned about the lack of quality one-act plays while serving as the theater director at Southland.

“I was part of a writing group here in Austin – (the late) Betty Benner was a part of that group – and one of the gals finally said, ‘Why don’t you stop complaining and write one yourself?’ So I did.”

That was about a dozen plays ago, almost all of them of the 10-minute variety.

He often travels to see his plays produced. 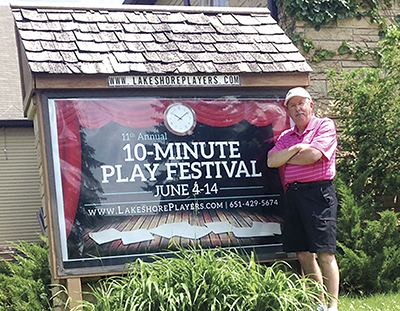 Brennan stands next to the sign for the 11th annual 10-Minute Play Festival. Photo provided

“It’s a rush,” he said, adding that it’s always interesting to watch new interpretations. “And I always learn something new” when he sees his plays performed.

In one production, he said, he saw the two characters in “940 Feathers,” a husband and wife, reworked by the director to be a mother/daughter duo.

“At first, I didn’t know what to think,” he said, after watching it performed. “I thought, ‘What are they doing?’”

Then, he watched it again – and realized the play now had a different dynamic which was compelling.

“None of the lines were changed; but the approach was different. It really came together,” he said.

It proved to Brennan that different versions of plays can have different impact with reshaping. He has rewritten some to fill a 30-minute format and found a different feel for the work.

“I am not sure, for instance, that this play (“940 Feathers) is really finished,” he said.

Plays are creations between the playwright, actor and director, he said. He has received calls from actors who ask about interpretation, “or what I was thinking when I wrote this line, or what did I mean by that,” he said. “And I really enjoy that.”

He also enjoys times when there is a read-back after some productions – a time when authors are asked to respond to audience questions following a production.

“To me, that’s always interesting,” he said.

He has heard others tell him that he does dialogue well. He prides himself on being able to listen to “five different conversations at the same time,” a skill honed when he was a bartender in college, he said with a laugh.

“You learned to listen to a lot of people at one time,” he said.

Brennan retains the rights to this plays — unlike some who might sell them to a publisher — to keep control of how they are produced. He rarely earns any money from productions, although he has received awards in competitions.

“It’s never anything big,” he said.

That’s okay – it’s not the reason he writes them, he said.

He doesn’t write every day — not plays, anyway.

He is a poet, too. Some of his poetry has earned placings in contests as well.

“I enjoy writing poetry — its impact is more immediate; you get response right away,” he said.

Still, when an idea for another 10-minute play strikes, he’ll start again.

The best part of writing plays, he said, is finding an idea or situation, to present in a different or unique way.

“That is what I enjoy the most,” he said. “To convey those ideas in an interesting way.”

The Austin Bruins won their fifth straight game when they blanked the Brookings Blizzard (14-7-2-2 overall) 2-0 on the road... read more