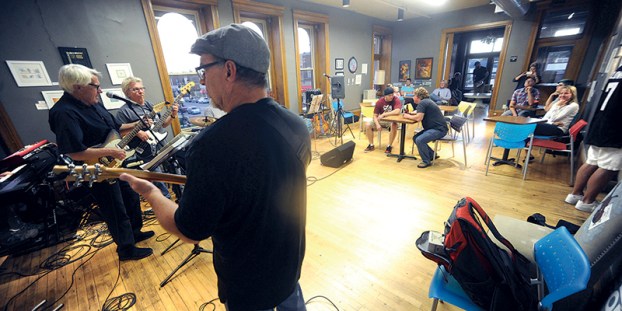 Year for the Arts: Early part of 2018 full events for lovers of music, painting and sculpture

2018 is just two days away from the time you read this, so this is the perfect time to start thinking what kind of entertainment you want to take in in the coming year.

The Austin Area Commission for the Arts has already begun loading the calendar for a year of fun favorites and new fun.

“It looks to be a really great year,” said Kelsey Ritchie, operations manager for the AACA. “We have lots of exciting things coming up.”

The entertainment offered throughout Austin by the AACA in recent years has expanded in its variety of acts and classes both at the Paramount Theatre and the Austin ArtWorks Center.

The goal has been not only to offer quality acts, but more of them in a wider spectrum of opportunities.

“[We’re] bringing as much in as possible, but we also, starting in the fall and winter at the Paramount, added more programming and we’re going to be offering more of that,” Ritchie said. “More of the same, just a little bit more variety.”

One of the newer additions that is slowly gaining ground and popularity are the $5 movies the Paramount started showing in June of 2017. It has been a throw back to early days of the Paramount when it was a movie theatre.

Since that time, staff has started to see a trend in popularity to black and white and older movies as well as the cult classics.

As the program continues into the new year, people will see a full slate of movies for each month, including a classic start to the year with “The Wizard of Oz,” this Wednesday.

On the stage of the Paramount people will see a welcome mix of those familiar shows as well as some new acts to grace the stage.

“We’re going to have the classics … but we’ll have some new shows as well,” Ritchie said. 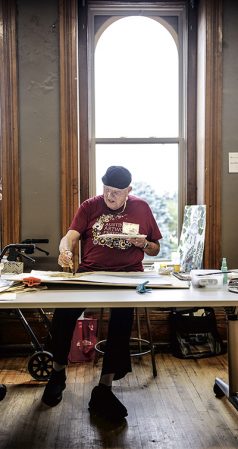 Arist James Wegner works on a piece in the upstairs of the Austin ArtWorks Center this past summer. Wegner were be holding a lecture series on art at the center this winter.

One of the shows Ritchie herself is most looking forward to is the MacPhail Spotlight held in February. A tribute to Stephen Sondheim, MacPhail performers from Twin Cities, which includes facility, will perform music from “West Side Story,” “Company,” “Into the Woods” and “Little Night Music.”

Normally, Ritchie said, this show is held in the Twin Cities, but the company, that has set up a popular Austin footprint, is branching out and taking the act on the road.

“The MacPhail Spotlight will be an amazing show,” she said.

Another new act people can look forward to, will be Banjo Hour with Captain Gravitone & The String Theory Orchestra on April 6.

“It’s really fun and interactive,” Ritchie said. “They kind of have a schtick.”

These are just a few of opportunities coming to the area. The ArtWorks Center will have its normal and wide array of classes for both adults and children including some newer classes such as a new lecture class series by Austin artist James Wegner.

There will also be the start of the new season of ArtRocks Open Jam sessions which have become an ever-increasing opportunity for the public to come and play in front of a live audience.

“They are very popular and we’re still getting new musicians every night,” Ritchie said. “What’s nice is we’ve been doing this for so long we’re getting new people. People are coming from the Cities, Rochester and further away. It just keeps building momentum.”

Much of this expansion can be attributed to a new programming committee that was started earlier this year for the exact purpose of listening to community suggestions and then trying to implement them.

“We started the programming committee to help bring in different shows, diverse shows,” Ritchie said. “We’re listening and figuring out what people want.”

For more on what the Austin Area Commission for the arts is bringing to the Austin area in 2018 head on over to its website at www.austinareaarts.org. 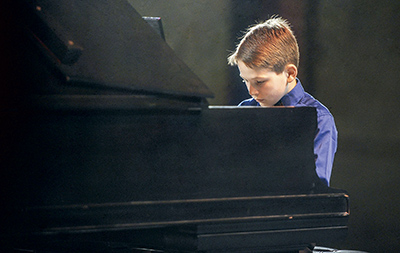 Intermediate champion Andrew Keenan gives his performance in the finals of the 2017 Harris Piano Competition earlier this year at the Paramount Theatre. Herald file photo

Calendar of events through April

ArtWorks Jam Sessions [all sessions at the Artworks Center]

An Evening With The Arts with James Wegner: March 23, April 13

Away from home for the holidays

Whew, the holidays can wear you out, can’t they?  The Hormel Historic Home and I had a wonderful season, and... read more