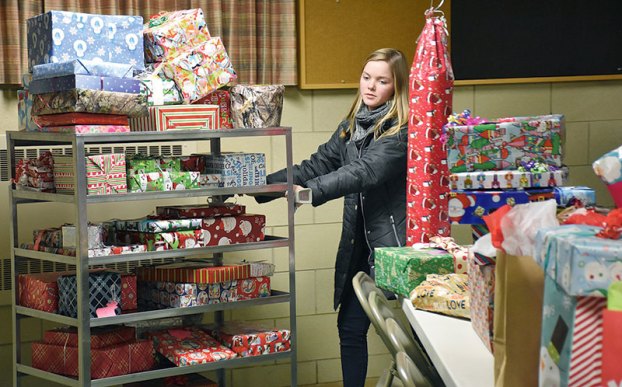 Katie Willrodt pushes a cart filled with gifts that are part of the Giving Tree project at St. Augustine and St. Edwards Catholic churches. Volunteers on Wednesday helped to sort the gifts so families could start picking them up. The parish has been providing the gifts to families in need for the past five years. Deb Nicklay@austindailyherald.com

Other volunteers used food carts from the church kitchen to stack the gifts from under the tree standing at the entrance to the sanctuary. Using the church elevator, they pushed the carts to the fellowship hall.

Christmas is the season of giving and St. Augustine and St. Edwards Catholic churches are holding that spirit close.

The churches, as they have for the past five years, gathered gifts for community families as part of their Giving Tree project. 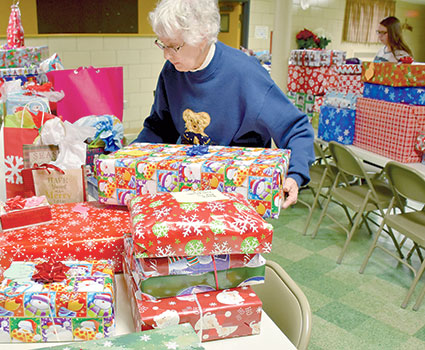 Betty Beckstrand helps sort gifts as part of the Giving Tree project, held by both St. Augustine and St. Edward Catholic churches. Over 200 gifts were purchased and donated.
Deb Nicklay@austindailyherald.com

Beginning on Thanksgiving weekend, members of the churches were able to pull a paper ornament off each of their church’s trees and used the information on the ornament about a family member to purchase a gift. Then the gift was wrapped and placed under the tree. Confidentiality is always kept, and people or families are only identified by number, said co-coordinator, Linda Keenan.

About 20 volunteers and six church confirmands helped with the project. On Wednesday, following the evening Mass, the gifts were gathered from under the church Christmas trees and brought to the St. Augustine hall where the volunteers brought together the gifts for each family.

As the gifts were brought to the hall, volunteers marked off tables, creating separate piles according to the numbers.

Families, in turn, will pick up their gifts over the next few days to take to their homes, said Keenan.

Keenan said the project began when it was apparent the need was growing. Father Jim Steffes is always the main point of contact for the families.

“I think it’s a great way to participate in the Christmas spirit,” said Keenan’s co-chairwoman, Michelle Christenson, the mother of three. “And, it involves my children, too.  They really like pulling off the ornaments and then buying for the person.”

Steffes said the people of the churches “are extremely generous; they have the Christmas spirit in their hearts, following Christ to help others.”

Children ‘Shop with a Hero’ in Austin The aisles at the Austin Walmart were crowded Wednesday evening as 50 local... read more