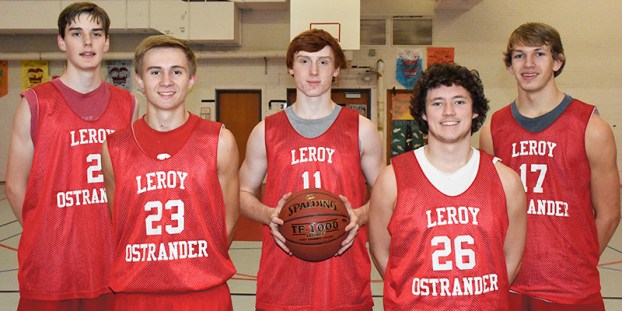 The LeRoy-Ostrander boys basketball team is off to its best start in at least a decade this season. The Cardinals starting lineup includes, from left, Seth Royston, Kolton Arndorfer, Trey Hungerholt, Sean Lohuis and Riley Olson. Rocky Hulne/sports@austindailyherald.com

Taking a big step: Cards are winning on the court and in the classroom

LEROY — When the LeRoy-Ostrander head coach Trevor Carrier took over the boys basketball program two years ago, he knew there were two things he had to do to turn the program around: He wanted his players to prioritize education and bring a positive attitude to school and he wanted his team to play against some tougher competition.

He immediately instilled a policy that holds players accountable for attending class and turning in homework assignments and it paid off, but the Cardinals were still struggling on the court with a young roster as they had a combined record of 12-41 overall those first two seasons. With much more experience on this year’s team, Carrier took his squad up to the Twin Cities over the summer to go against some tough competition. Due to him having a cousin who coaches at Henry Sibley, the Cards were able to line up summer scrimmages with teams like Edina, Coon Rapids and Caledonia. 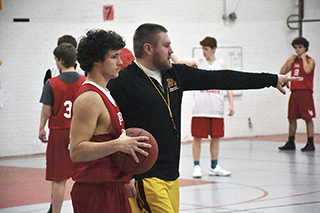 That summer schedule has paid off as LO is off to a 5-1 overall start to this season. After dropping the opener to Kingsland, the Cardinals have their first five-game winning streak since the 2004-2005 season.

“I think they’re expecting [the success] this year with the hard work they put in,” Carrier said. “Typically when you’re good in school and you get your grades done, and you come to practice hard and focus, good things will happen. We push a family environment here and we’re dealing with grades and actions during school. We hold them accountable for being in school. We do study sessions and we’re very active as a family and tight as a group.”

The last time the Cardinals posted double-digit wins in a season was in 2008-2009, but their fast start has them thinking they can reach that mark this season. As the wins come, the Cardinals have noticed a little more excitement around the program and it’s made them much more excited about game nights. 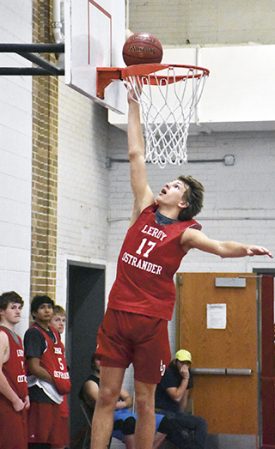 LeRoy-Ostrander’s Riley Olson goes up for a lay-up in practice in LeRoy Monday. Rocky Hulne/sports@austindailyherald.com

“It’s a lot different atmosphere,” said LO junior guard Sean Lohuis. “You see a lot more people in the crowd, the student section’s a lot louder and everybody’s a lot louder. There’s been a happier feeling around the school.”

LO junior guard Trey Hungerholt has played big varsity minutes since he was an eighth-grader, but this is his first taste of playing on a team with a winning record. He’s finding the game much more enjoyable than it was and he’s glad the hard work has paid off for a core group that has been playing together since they were in sixth grade.

“We’ve improved every year and we took a big step this year. It’s a lot more fun winning,” Hungerholt said. “I’ve gained a lot of experience and I’ve learned a lot along the way.”

LO senior Seth Royston said the Cardinals gained a lot of confidence when they were competitive in a 10-point loss to Class AA power Caledonia over the summer and he also pointed out that the Cards have picked up their teamwork this winter.

Royston has been around the LO basketball program for a long time as he had two older brothers play for the Cardinals before him. 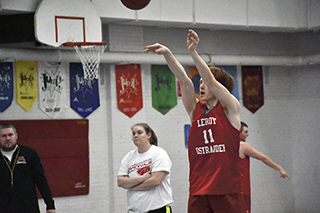 “My brothers pushed me hard and I don’t think I would be the player I am today without them,” he said. “I enjoyed watching them play growing up.”

As the Cards have picked up their wins, they haven’t slowed down off the court either. Lohuis said Carrier’s focus on school has rubbed off on the team, which holds study sessions on Wednesday nights. The Cardinals also have to run in practice for missed assignments by players.

“The kids who usually get the better grades and get all of their work done are the ones on the court,” Lohuis said.

“We’re excited. We’re playing better offensively and we’re playing defensively, which is the most important,” Carrier said. “I have a larger bench than we normally have. I don’t think we’re scared of anybody and I think we’re looking forward to playing Goodhue and Spring Grove.”

The Cardinals will host Grand Meadow at 7:15 p.m. Tuesday.

The YMMCA of Austin Stars Gymnastics teams competed nine the winter tune up meet in New Prague over the weekend.... read more