Steven was admitted to the hospital the first of four times on Oct. 10. Months of severe back pain had proven to be multiple myeloma. He passed away on Dec. 17, after an exhausting two-month battle, which abruptly ended high hopes for remission. Fortunately, he was able to rest without pain during his days in hospice care at Rochester Methodist Hospital, while his loving family kept vigil. 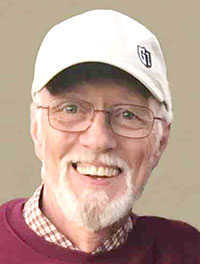 Steven James Kinney was born in Austin, Minnesota, on Oct. 10, 1950, to Don and Alphia (Engen) Kinney. He graduated from Austin High School, Austin State Junior College and Southwest State University with a degree in theatre. He married Penny Samuelson on Sept. 6, 1975.

Steven worked in the theatre his entire adult life. He toured the country with Bill Fegan Attractions out of Dallas, Texas, for two years as Scrooge in their production of “A Christmas Carol,” then as their technical director for three more years of national tours. He worked for several area theatres including the Minnesota History Theatre, the Rochester Civic Theatre and the Rochester Repertory Theatre. He served as artistic and managing director for Feast and Footlights Dinner Theatre in Rochester, Minnesota. In Austin, he worked for Austin Community College Theatre, Matchbox Children’s Theatre and Summerset Theatre. He was instrumental in helping Frank Bridges, his friend and mentor, perpetuate Summerset Theatre, which is now 50 years old. For 23 years, Steven and Penny produced a holiday dinner theatre variety show, “Forever Christmas” in Rochester. Then, for over 20 years, Steven worked exclusively for the Albert Lea Community Theatre. He was still employed there when he became ill. Steve excelled as a director, designer/builder and as an actor. He was loved by theatre people all over the state with many crediting him as a mentor in their own theatrical careers. He was always the life of the party, known for his wit, his tremendous creativity, his wisdom and his diplomacy. He will be greatly missed forever.

An avid (and great!) pool player, Steve played in Austin area pool leagues and tournaments for many years. He loved the game and his friends in the pool community. The idea that back pain might keep him from being able to shoot pool devastated him.

Friends are invited to the Worlein Funeral Home for visitation on Wednesday, Dec. 27, from 4-8 p.m. and to a memorial service at 11 a.m. on Thursday, Dec. 28, at the Frank W. Bridges Theatre, Riverland Community College. The Kinney family will also greet friends for one hour prior to the service. Please join the family for a social time at the Eagles’ Club following the service.

Memorials in Steven’s name can be given to The Hormel Institute, Summerset Theatre of Austin or Albert Lea Community Theatre. Worlein Funeral Home is assisting the family. Condolences can be expressed to the family online at www.worlein.com.