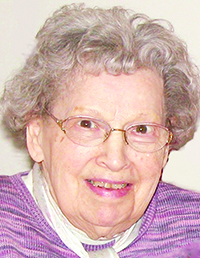 Rosie Mae Zacharda was born April 12, 1923, in rural St. Ansgar, Iowa, the daughter of Frank W. and Marie (Renc) Zacharda. She attended country school near Spring Valley, Minnesota, and later high school in St. Ansgar. On Nov. 10, 1942, she married George Warren Anderson in Austin. After their marriage, Rosie moved with Warren while he was in the service before settling in Austin in 1951, owning their first home. After the children were older, Rosie worked in food service, first at the Austin High School and later at the Holiday Inn. She also volunteered serving meals at the American Legion Post. She liked to square dance, loved to travel and was able to visit the majority of the United States. She was a member of St. Olaf Lutheran Church where she was active in Circle and a member of the American Legion Auxiliary. The couple was able to winter in Texas for several years as well as visit Happiness Resort for about forty years each July where family and friends would gather with them. Her husband died on March 15, 1999. Rosie continued to live in her own home until 2001, when she moved to the Chauncey Apartments. She later moved to St. Mark’s Lutheran Home.

Survivors include her son, Bradley Anderson of Minneapolis; two daughters-in-law, Sandra Anderson of Rochester, Minnesota, and Phyllis Anderson of Edina, Minnesota; four grandchildren, Todd (Mary) Anderson, Tanya Anderson, Anthony (Kelly) Anderson, and Scott (Laura) Anderson; seven great-grandchildren, Claire, Sophie, Jacqueline, Bridget, Caroline, Simone, and George; as well as many other relatives and friends. She was preceded in death by her husband, G. Warren in 1999; two sons, Thomas in 1998, and Garry in 2008; two sisters; and four brothers.