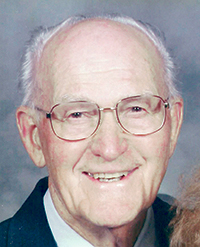 Noel was born Aug. 21, 1925, in Winona, Minnesota, to Homer and Cora (Sebow) Goss. He grew up on the family farm near Lewiston, Minnesota. Noel graduated from Lewiston High School in 1943 and was drafted into the U.S. Navy. After his service, he attended Winona State University for a year while working on the family farm and went on to graduate from the University of Minnesota in 1951. After graduation, he began his career with Hormel, retiring in 1987.

Noel married Dorothy (Volkmann) Petersen in October 1953. For 20 years after his retirement, Noel and Dorothy enjoyed spending their winters in Arizona.

Noel liked to play golf and he was a very avid hunter and fisherman. He served as president of the Austin Country Club, was a member of First Congregational Church, the Austin American Legion Post 91, Fidelity Lodge 39 AF & AM and was active in the Shriners.

He was preceded in death by his parents; and wife, Dorothy.

Services will be determined at a later date. Memorials may be designated to First Congregational Church. Clasen-Jordan Mortuary is in charge of arrangements.