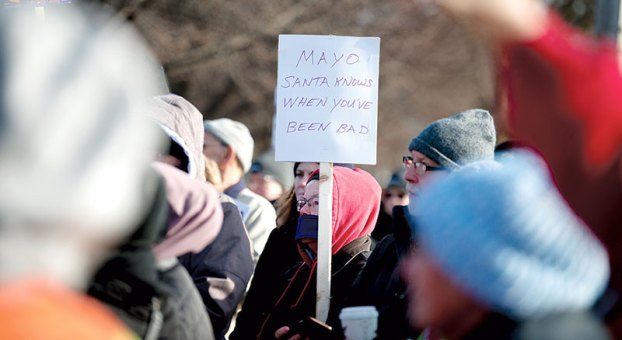 A sign reading “Mayo Santa knows when you’ve been bad” is held up during a rally in December in front of Mayo Clinic Health System in Albert Lea. Colleen Harrison/Albert Lea Tribune

Dozens of Mayo Clinic Health System in Albert Lea employees on strike and their supporters picketed Tuesday on a public sidewalk in front of the Albert Lea hospital.

Marchers chanted slogans supporting the approach of employees to a new multiyear contract with the hospital system and deriding Mayo Clinic Health System for its approach to rural health care with phrases such as, “When Mayo workers are under attack, what do we do? Fight back,” “What do we want? Contract! When do we want it? Now,” and “Hey, hey, ho, ho, Mayo’s greed has got to go.”

“They want to take all the language out that we’ve had since I worked here about health care, PTO, all kinds of stuff, and they want to have language in there about subcontracting,” he said. “So, we feel just like for small Albert Lea, that would be a devastating thing to have worse jobs if we ever subcontracted.”

The strike comes as conflict remains between SEIU and Mayo Clinic after the union objected to a clause that union benefits could change in accordance with a change in benefits for non-unionized employees.

Henry Tews, a plumber and maintenance worker at the hospital, said he was glad state politicians attended the event.

It has been more than two years since maintenance workers at the hospital had a contract, Tews said, noting the union rejected attempts by the hospital system to add language that would allow Mayo Clinic Health System to subcontract services.

“You hear that over there?” said Bobby Kasper of the AFL-CIO union, directly facing the hospital building. “We are going to be here as long as it takes.”

Letter: Thank you for supporting the Karl Tourney