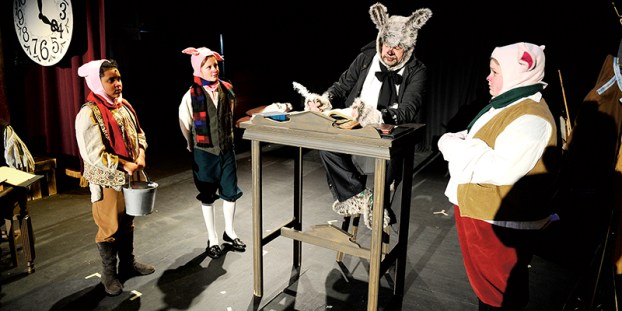 Members of the Matchbox Children’s Theatre rehearsed a scene from “A Fairytale Christmas Carol earlier this month. Herald file photo

Matchbox holding auditions for “The Lion, the Witch and the Wardrobe”

In keeping with its seasonal theme of plays based on books, the Matchbox Children’s Theatre is holding auditions for the C.S. Lewis classic “The Lion, the Witch and the Wardrobe” on Jan. 4.

The play is based in the story of the same name, which tells the tale of four siblings who are evacuated from London during the Blitz to the countryside home of Professor Digory Kirke. There, they stumble upon a wardrobe that transports them to the Land of Narnia, where they meet characters such as Aslan the Lion and the evil White Witch.

Cameron Davis, who has worked on other shows with Matchbox Children’s Theatre and Summerset Theatre, will direct the show.

Auditions will be held from 6:30-8 p.m. on Thursday, Jan. 4, at the Historic Paramount Theatre. Performances will be Feb. 16-18. Roles are for suggested ages 10 and up. There is no need to have any pieces prepared, just show up and read.

Others’ opinion: Come together to reach an agreement for Mayo workers

Albert Lea Tribune Distributed by Tribune Content Agency, LLC. The news this week in Albert Lea has centered much around... read more