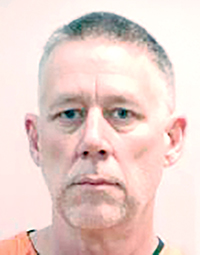 A man whose reported implied threats caused a soft lockdown at Southland and LeRoy-Ostrander Public Schools on Monday was charged Wednesday in a court appearance in Mower County District Court.

Grady Lee Gabbard, 57, of Adams was charged with two counts of felony terroristic threats and one count of misdemeanor domestic assault.

According to the court complaint, the Mower County Communications Center was contacted shortly after 9 a.m. Monday by the Collin County Texas Sheriff’s Office. They said that a man called a crisis center in Frisco, Texas, asking what they do to people involved in mass homicides and saying that he had homicidal thoughts. The hotline provided the sheriff’s office with the number, which came back as belonging to someone in Adams, Minnesota.

The Mower County Sheriff’s Office called the number and reached the voicemail, at which point it was determined the caller may have been Gabbard, according to the complaint. Gabbard, who is required to register as a predatory offender, has a history of making harassing or obscene phone calls to crisis and help lines.

Chief Deputy Mark May said the person who took the original call said it came into the Rape Crisis Center of Collins County, Texas, at 6 a.m. He said the caller asked what would happen if someone was homicidal and asked him if he’d been watching the news lately. He was asked if he wanted to be connected to a suicide hotline, at which point the caller hung up.

Law enforcement then went to the Adams area to search for any unusual activity around the schools and daycare centers, according to the complaint. When they found nothing, they contacted Southland and LeRoy-Ostrander School Superintendent Jeff Sampson, who placed the schools on a soft lockdown, in which the outer doors were locked.

Law enforcement contacted one of Gabbard’s family members, who said Gabbard was having suicidal and homicidal thoughts that morning, according to the complaint.

The family member indicated he had made threats to kill people and that he was believed to be at home. She also said he hit her in the face on Saturday and that he had thoughts of killing her.

Law enforcement set up a perimeter around Gabbard’s house in the 100 block of First Street Northwest after getting information he was inside. After speaking with negotiators, Gabbard surrendered peacefully.

The court complaint says Gabbard told a detective he was upset about having to register as a predatory offender and that he had been having homicidal thoughts with no specific plan. He allegedly indicated that if he were to act on them, it would possibly involve a lot of people. He said he had been fighting off those thoughts and called the hotline in Texas to talk to someone about them.

In Minnesota, felony terroristic threats carry a maximum penalty of five years in prison and a fine of $10,000.

Gabbard will appear in court again on Dec. 27.