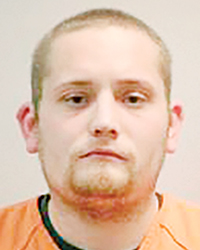 A man who called police to complain a woman spat on him and threw a bottle at him appeared on Wednesday in Mower County District Court.

According to the court complaint, Bakke called police at about 3:56 a.m. on Saturday saying that a woman at a residence in the 1200 block of 10th Avenue Southwest was intoxicated and had spat on him and thrown a bottle at him.

When police arrived, one officer spoke to Bakke while another spoke to two women at the residence, according to the complaint. Bakke, who was on probation, denied drinking any alcohol, but allegedly blew a 0.13 percent in a preliminary breath test. Bakke told the officer the two women were drunk and that he argued with one of them. He said the Christmas tree got knocked over, but denied assaulting her.

When the officers entered the residence, they had to step over the Christmas tree, according to the complaint. They also saw an empty baby bottle on the floor.

An officer spoke the women; the one who argued with Bakke had an infant child, according to the complaint. She said Bakke had been out drinking and came to the residence intoxicated. They argued and she told him to leave, which he did for a while, but he returned angry. She said they argued again, at which point her grabbed her by her sweater and knocked the Christmas tree over. She said the tree struck the infant and that she was afraid of Bakke.

A review of Bakke’s criminal record shows a prior conviction for assault and violating a domestic assault no contact order.

In Minnesota, felony domestic assault carries a maximum punishment of five years in prison and a $10,000 fine.

Bakke will appear in court again on Jan. 11.