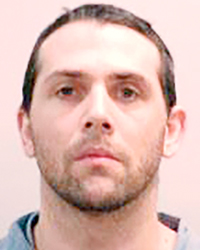 James Paul Hutchinson, 35, of Austin pleaded guilty Monday to felony charges of a violent felon possessing/using a tear gas compound and misdemeanor domestic assault as part of a plea agreement in Mower County District Court. He initially pleaded not guilty to the charges on April 13.

Hutchinson and one of the men approached officers in the area of First Avenue Northwest and Ninth Street Northwest. He told the officers that the woman attacked him and that he laid her on the ground and left the residence. He denied attacking her with pepper spray.

An independent witness, however, told police that Hutchinson was the aggressor. She said she was driving down the road when she saw Hutchinson chasing a woman whom he then dragged to the side of the road and sprayed her in the face with something. She said the woman then went to the ground and was holding her face.

A review of Hutchinson’s criminal record shows prior convictions for drug possession, burglary, theft and criminal damage to property.

In Minnesota, felony violent felon possessing/using a tear gas compound carries a maximum penalty of five years in prison and a $10,000 fine.

Hutchinson will be sentenced on March 8.