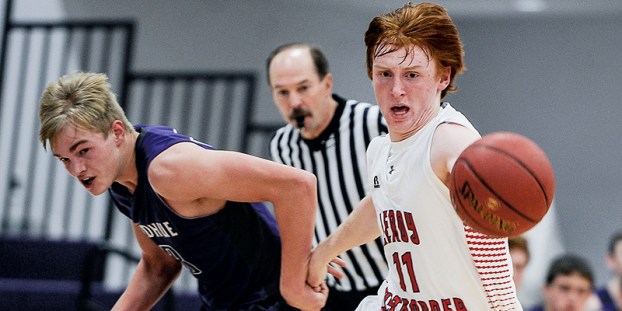 LeRoy-Ostrander’s Trey Hungerholt chases down a lose ball during the second half against Goodhue Wednesday night in Grand Meadow. Eric Johnson/photodesk@austindailyherald.com

Cards make a big statement in win over Goodhue

GRAND MEADOW — The LeRoy-Ostrander boys basketball team continued to build on its best start in at least a decade when it knocked off a perennial Section 1A contender in the Grand Meadow Tournament Wednesday. The Cardinals clamped down on the defensive end of the floor to beat Goodhue 48-34.

“They have good ball players and a great head coach,” LO head coach Trevor Carrier said of Goodhue. “It’s a massive win for our program. We played great defensively and this was a statement win for us. We’re hoping it puts LeRoy on the map.” 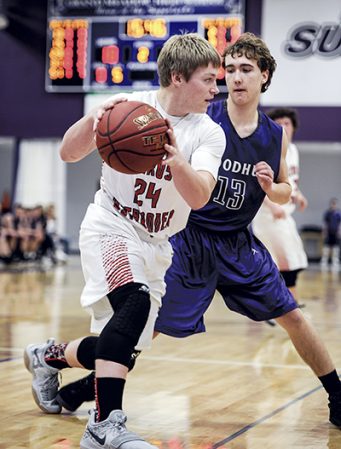 LeRoy-Ostrander’s Carter Johnson controls a rebound during the second half against Goodhue Wednesday night in Grand Meadow. Eric Johnson/photodesk@austindailyherald.com

The Wildcats (5-4 overall) were within 15-14 in the first half, when Seth Royston hit back-to-back threes for the Cardinals (8-1 overall) to go up 21-14. Goodhue got no closer than five the rest of the way and Royston hit a three to start the second half, which saw LO put together a 9-0 spurt to go up 32-18.

“I think we have really good rhythm right now,” said Royston, who finished with 17 points and five rebounds. “We’re playing as a team and we’re working hard.”

LO’s second half run came with sophomore Riley Olson on the bench with foul trouble. Although Olson finished with 10 points and five rebounds, he was able to sit for the first big stretch of the second half as the Cards pulled away.

Sophomore Tanner Kasel gave LO a boost in a variety of ways during that run. 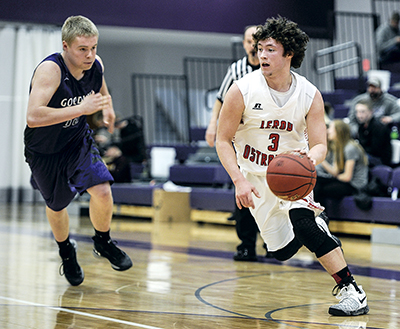 LeRoy-Ostrander’s Sean Lohuis heads to the hoop during the second half against Goodhue Wednesday night in Grand Meadow. Eric Johnson/photodesk@austindailyherald.com

“You’ve got to give all the credit in the world to Tanner Kasel,” Carrier said. “You wouldn’t know it by the box score, but he took a charge and his defensive position helped us make a run.”

LO junior Trey Hungerholt locked down on the defensive end as he helped slow down Sam Opsahl, who is Goodhue’s go-to scorer. Hungerholt also ran the offense for the Cards as he racked up seven points, four rebounds, six steals and five assists.

“It’s a huge win for us,” Hungerholt said. “We knew they were good, but we treated it like any other game.” 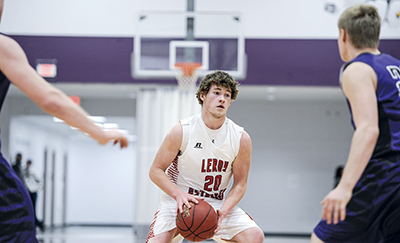 LeRoy-Ostrander’s Tanner Kasel controls the ball out front during the second half against Goodhue Wednesday night in Grand Meadow. Eric Johnson/photodesk@austindailyherald.com