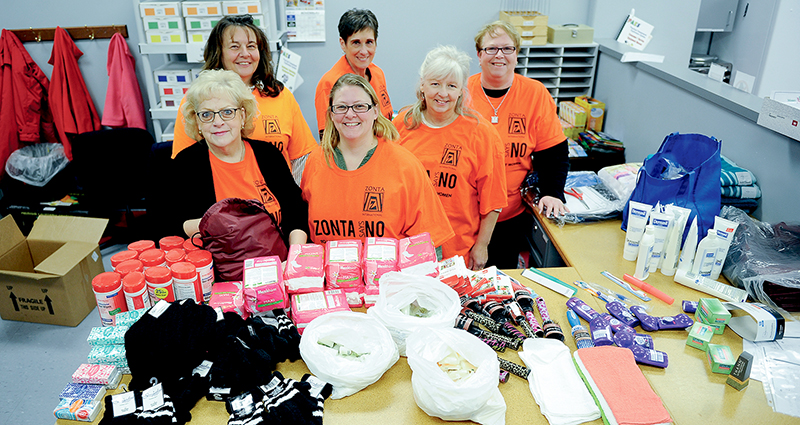 Members of Austin’s Zonta Club recently came together to pack bolt bags containing necessities that a victim may need if they are required to leave an abusive situation quickly. They are, front: Linda Miller, from left, Stacey Mason and Mary Goetz. Back row: Renee Anderson, Mary Kittleson and Cheryl Retterath. Photos by Eric Johnson/photodesk@austindailyherald.com

Members of the Zonta Club of Austin try in a variety of ways to help women advance. You might know them for their nut sales to support advocacy for women. That advocacy took the form of creating BOLT Bags for survivors of domestic violence last week.

The bags have basics such as toiletries, items for children and other items a woman likely would need after escaping from domestic violence, said Zonta member Mary Kittelson.

Zonta members gathered last week in a downtown storefront to assemble bags that are given to authorities to distribute as needed. 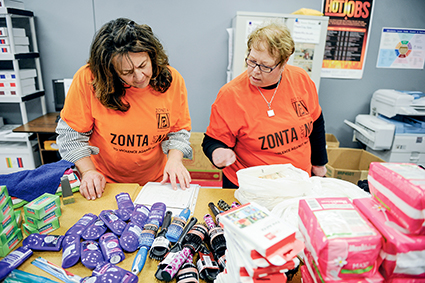 Renee Anderson, left, and Cheryl Retterath look over a list of items to be included into each bolt bag they were packing last Tuesday night.

Zonta International has been on the front lines of global and local efforts to help women overcome barriers to equal education, health care, legal rights, credit and employment through education, service and advocacy programs funded by the Zonta International Foundation. Founded in 1919 in Buffalo, New York, the organization now has nearly 30,000 members in more than 1,200 clubs in 67 countries and geographic areas.

“The active engagement and participation of women in policy making and strategy development, and the creation of gender-sensitive programs are both vital for the full attainment of the goals of gender equality, education, sustainable development and the elimination of all forms of discrimination and harmful practices against them,” said Zonta Club of Austin President Renee Anderson.

For further information about Zonta International or the Zonta Club of Austin, you can contact Retterath at 438-4330 or Mary Jo Follmuth at 437-8773. 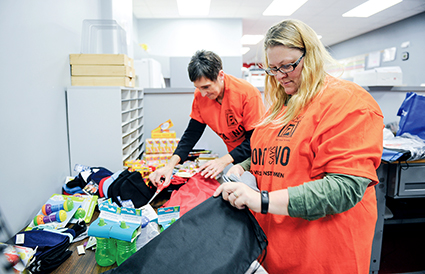 Stacey Mason packs items into a bolt bag for children Tuesday night. The bags will be provided to the Crime Victims Resource Center.

Zontians worldwide have provided more than $22 million for international programs and projects benefiting more than eight million women in over 67 countries. Zonta International service programs are currently focused on providing educational opportunities and access to healthcare, and the prevention of violence against women and include:

•  The Amelia Earhart Fellowships, provide Fellowships to women in 58 countries for graduate work in aerospace science and engineering since 1938.

•  The Young Women in Public Affairs Awards to high school women who demonstrate a commitment to service in their schools and communities.

•  The International Service Program, funding projects that empower women to overcome barriers to their equal human rights. During the 2016-18 biennium, Zonta is providing support to the following: UNICEF Prevention of Mother-to-Child Transmission of HIV in Rwanda, UNIFEM Safe Cities for Women Project in Guatemala City, Guatemala, and San Salvador, El Salvador and UNFPA Reduction of Obstetric Fistula in Liberia within the context of Maternal and Newborn Health.