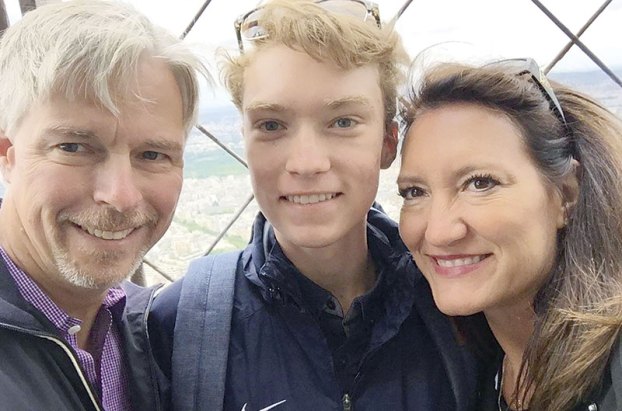 Tyler Quitmeyer, at the top of the Eiffel Tower with his parents, Bruce Quitmeyer and Lori Marco. Photo provided

Being a part of the Global Youth Institute was such  a big deal to Tyler Quitmeyer of Austin, he will fly from France just to attend the gathering.

He has good reason. The Institute is a coveted part of the World Food Prize symposium being held this week in Des Moines.

Quitmeyer, 16, is a foreign exchange student with AFS (American Field Service) and will be a senior at Austin High School when he returns to Minnesota next summer. He is the son of Bruce Quitmeyer and Lori Marco of Austin.

Quitmeyer was chosen for the honor — among 200 students from across the U.S. — on the strength of a required essay, which he will also present to some of the best minds on food security issues during the three-day Institute.

The three-day Global Youth Institute is hosted by the World Food Prize Foundation. In Minnesota, the program is sponsored by the University of Minnesota College of Food, Agricultural and Natural Resource Sciences.

The issue of food security is a familiar one to Quitmeyer’s family, who has been active in volunteer work in Guatemala through Hormel Foods, where Tyler’s mom is a senior vice president of external affairs and general counsel. Hormel has, in recent years expanded its philanthropic reach, and has worked hard to develop high-calorie, high-protein food, such as Spammy, a turkey paste that fights hunger.

Hormel chose Guatemala as its focus that suffered a 50 percent poverty rate and malnutrition.

Hormel senior scientist, Melissa Bonorden, was part of the team to bring Spammy the impoverished nation and serves as Tyler’s mentor for the World Food Prize.

While Tyler is more immediately known for his artistic ability — one of his watercolors took a third placing at the Minnesota State Fair this year — that he wanted to attend a science-infused gathering is not a surprise to his family. Tyler has been concerned with social issues and feels strongly about volunteering time to organizations he supports.

“And, he does well in all his classes,” said his mom, and added his essay — “Feminism in the Developing World,” emphasizes his concern for the rights of Ugandan women, whose struggle against a male-dominated society can and does result in illness and starvation.

His essay explores the country’s culture and its government, who, while passing laws that seemingly protect women’s rights to land, rarely safeguards those rights in practice. Women who are widows or divorced, who had relied on the land for growing food, find themselves victims of the clan system, where men were only allowed ownership. Despite the laws, women who have lost or divorced a spouse, as well as their children, suffer starvation when they are forced to leave the land. 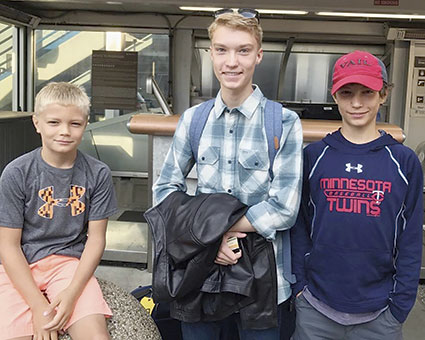 Tyler Quitmeyer with his brothers, Hadyn and Jacob, in Paris when the family opted to visit the country before Tyler moved there as an AFS student for the 2017-2018 school year. Tyler will attend the Global Youth Institute as part of the World Food Prize Symposium this week. Photo provided

While the solution, he said, seems simple — just enforce the laws — “the answer is infinitely more complicated as it is rooted in deeply-held cultural beliefs and misinformation about personal freedoms.”

In addition to presenting his paper, Tyler and fellow students, with their mentors, will tour cutting-edge industrial and research facilities, and take part in symposium discussions with global leaders in science, industry and policy-making.

The World Food Prize is the foremost international honor recognizing the achievements of individuals who have advanced human development by improving the quality, quantity or availability of food in the world.

Dr. Norman E. Borlaug, winner of the Nobel Peace Prize in 1970 for his work in global agriculture, envisioned a prize that would honor those who have made significant and measurable contributions to improving the world’s food supply.

Beyond recognizing these people for their personal accomplishments, Borlaug saw The Prize as a means of establishing role models who would inspire others. His vision was realized when The World Food Prize was created in 1986 with sponsorship by General Foods Corporation.

Mayo Clinic and the city of Albert Lea have agreed to discuss the hospital system’s planned transition of most inpatient... read more