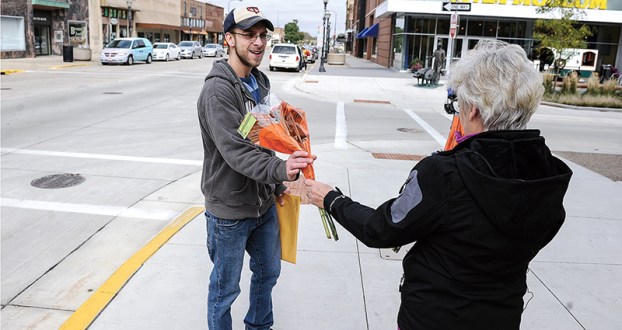 Vicki Trimble, owner of the Hardy Geranium gives a bouquet of flowers to Micah Lockie as part of the Petal It Forward where people were given flowers and encouraged to share them with others. Eric Johnson/photodesk@austindailyherald.com

Trimble, owner of Austin’s Hardy Geranium, gave out free flower bouquets in downtown as part of a one-day Society of American Florists campaign. The give-away began in 2016, to let people experience the positive impact flowers can have on your outlook.

By the end of the first campaign, flowers had been given away in 234 U.S. cities. The success of the first year prompted this year’s campaign. 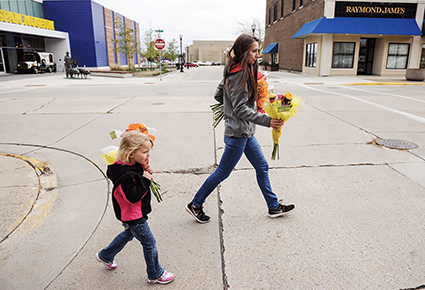 Mackenzie Trimble gets some help delivering flowers from four-year-old Vivienne Godfredson as part of the Hardy Geranium’s Petal It Foward Wednesday afternoon. People were given flowers and encouraged to in turn give flowers to others.

This was the first year Hardy Geranium participated in the event.

Recipients of the flowers could be anyone from friends to complete strangers.

“I gave a lot of them to people I’ve never met from out of town,” she said.

Trimble said she gave away all 200 bouquets. She also says she plans to do it again next year.

“I hope everyone enjoys (the flowers) and they had a positive impact on their day,” she said. 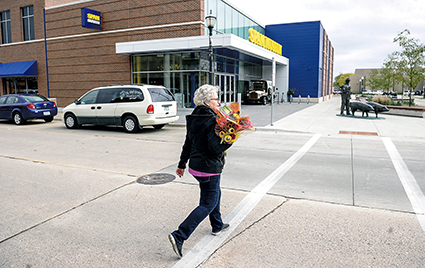 Randy Forster is a familiar face around Austin. People may recognize him as the co-director of Summerset Theatre or from... read more