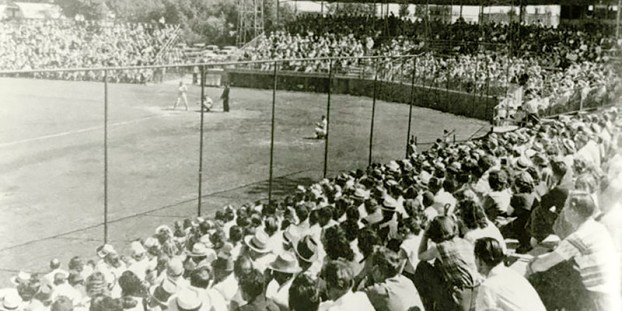 Austin Packers in action in 1951. Photo provided by the Mower County Historical Society

Marcusen Park is turning 70 years old next summer, and it’s a testament to the community of Austin that the park still hovers next to the Cedar River.

Built on farm land owned by the Marcusen family in 1948, Marcusen Park has seen a lot of baseball over the last seven decades, but it’s also seen its fair share of floods as well as the Park nearly being torn down in 2004 until the Marcusen Park Baseball Association was formed. To the Austin residents who grew up playing in Marcusen, it’s a lot more than a baseball stadium.

When Marcusen Park Board Association member Joe Serratore moved to Austin, he quickly started to try and revive the amateur baseball scene, which had fizzled in the 1980s. Since then, he and his wife Kathy have made Marcusen a labor of love as they’ve put in countless hours preparing the field, fundraising and running the concessions stand.

“There’s a lot of good things down here. It’s quite and it’s a good atmosphere,” Serratore said. “Very simply, it’s ours. It’s not some park that you’re directed on what you can and can’t do, but in the same token you’re responsible for everything. We’ve gotten huge support lately from the city of Austin, mainly the Park and Rec department and they are extremely helpful. I think they now know that we’re not going anywhere.” 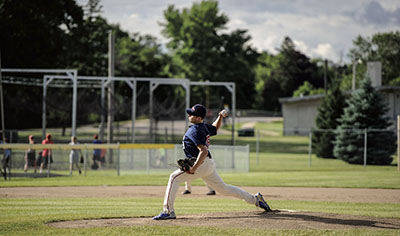 When Austin grad John Frein moved to the Twin Cities 20 years, he could’ve found a team to play in the Metro and plenty of people have asked him why he doesn’t play in the cities. But Frein, who has played approximately 300 games at Marcusen Park, has chosen to make the 200-mile round trip commute to Austin to play home games with the Greyhounds and he hasn’t regretted it.

“It’s like golf, you don’t just play golf on any par three course. I’ve played ball on many ballparks across the state and across the country,” Frein said. “There’s just something about playing on the field where you grew up. The park has been worked and manicured to its current state, getting a little better each time I see it. What you see on the surface is nice. However it’s more than aesthetics. The character of the ballpark is like no other. The feeling of playing the game at Marcusen Park is different than anywhere else.”

Frein has spent many of his years playing with Bryan Toov, who always looked up at Marcusen Park as the big stage in Austin. Like Frein, Toov played VFW, legion, high school and amateur baseball in Marcusen Park.

“We grew up just hoping to play a game there someday, hoping to be good enough to play high school baseball there, and [Frein and I] ended up playing there for 20 plus years,” Toov said. “I have a lot of personal memories at Marcusen but i think it is the big picture that is probably the most important for this story.” 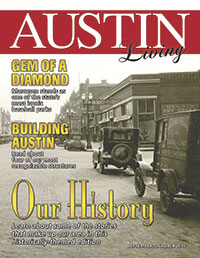 This is just a sample of all the great content available in Austin Living, but we need help to bring it all to you. If you have an idea you think would be perfect for our pages email eric.johnson@austindailyherald.com

Frein said that each summer has brought him closer to calling it quits on playing with the Hounds, but Marcusen keeps drawing him back in. While the drives from his home in the cities can sometimes be stressful, he finds himself immersed in comfort during the game and when it ends, he often finds himself meeting up with family and friends.

“After every game I pack relatively slow,” Frein said. “Typically I’m one of the last to leave. One of my favorite things to do is sit in the bleachers taking in the sight and sound of the ballpark after the lights turn out. It is a very peaceful place.”

Frein’s children have also become very familiar with Marcusen as they’ve grown close to the Park in their dad’s hometown.

“They know and understand how much fun the ballpark is. If they’re unable to attend with me, they get very upset, as if something is being taken away from them. My kids have learned to know and love the game simply hanging out around Marcusen Park,” Frein said. “It’s not just my kids either. You know the park is an awesome place when the sidelines are packed with kids playing wiffleball between chasing foul balls. Every once in awhile a stray ball comes onto the field and it’s well worth the timeout.”

Serratore credited Jeff Ettinger and Mike House for being benefactors in the past and but he said Marcusen will need a little more funds in the future as it still owes $58,000 on the new lights and he’s hoping the Park can undergo another $150,000 worth of improvements in the future.

But there is plenty to suggest that the park will persevere like it has so many times before.

On the wall of Marcusen Park, there is a mural that reads, ‘Keeping the Memories Alive’ and the Park certainly created a lot of memories over the years. There was a legendary home run hit by Kent Hrbek, there were games played by MLB players Paul Molitor, Dave Winfield and Austin’s own Mike Wuertz.

Frein recalled the FSN night in 2006 when Ron Coomer held his son TJ during the postgame show and he also looked back on some games in the Spamtown Challenge, including Craig Braaten’s walk-off homer against Chaska in 2008 and a game between LaSalle and Jamestown that began at 1:30 a.m. in 2009.

“The memories created at Marcusen Park are way beyond my interpretation,” Frein said. “Thousands of players and fans have experiences that stem from the Spamtown Challenge and Marcusen Park.”

“We grew up watching those guys in the World Series,” Toov said.

Serratore has several fond memories of the amateur games as he recalls the Blue Sox’ Casey Toops hitting a walk-off homer to knock of the Hounds in a state-qualifying game in 2010. He’s also been a student of Marcusen’s history and he credits well known baseball names like Dick Seltz, Emil Scheid and Howie Strey of all being key contributor’s to the sport in Austin.

“At that time there were no college wood bat leagues so there was an important reason for amateur baseball. That was a big deal,” Serratore said. “Baseball brought a lot of wonderful people to town like Dick Seltz, Red Lingren and Joey Raso, Jack Level and Sam House.” 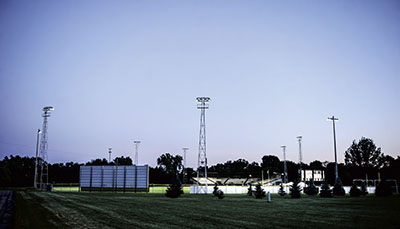 Marcusen Park opens on June 7 of 1948. The Austin Packers beat Spencer, Iowa, 9-5 in the first ever game in the park. Emil Scheid was the coach for the Packers in that game and Duane ‘Red’ Lingren hit the first homer in Marcusen Park history.

There were no amateur games played in Marcusen.

New lights are put up in Marcusen Park.

Amateur baseball slows down in Marcusen

Austin Greyhounds begin to bring back amateur baseball in Austin in 1991.

Marcusen avoids being torn down due to a big donation from Mike House.

New LED lights are installed in Marcusen Park, along with a new sound system and new storage space.

Families are invited to the Jay C. Hormel Nature Center for a spook and a stroll

For 33 years the woods surrounding the Jay C. Hormel Nature Center have been turned into a frightening good time... read more