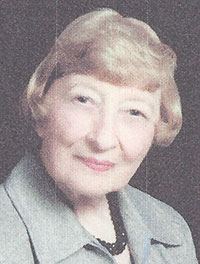 Myrna Darlene Phillips was born in New Sharon, Iowa, on Sept. 22, 1925, the daughter of Homer and Letha (Castner) Dunwoody. After graduating from New Sharon High School in 1943, she worked until her marriage on Oct. 27, 1945, to John Phillips. Throughout John’s moves with the George A. Hormel Co., Myrna maintained a pleasant and supportive home life. Through John’s career at Hormel’s, Myrna was able to travel and meet people from many walks of life. Many Hormel employees and their spouses became lifelong friends. While living in Ringsted, Iowa, John and Myrna raised their two children, John and Mary Joy. Myrna was homemaker, mother, cook, Cub Scout leader, PTA member, public library board member, Sunday school teacher, church choir member, and worked for a few years at the Ringsted Post Office.

In 1966, John and Myrna were transferred with the Hormel Company to Austin, where they were members of Westminster Presbyterian Church and the Austin Country Club. It was during this time Myrna was able to fulfill her lifelong ambition of a college education, receiving an associate degree from Austin State Junior College, and a bachelor’s degree and master’s degree in English and Media Services from Mankato State College.

During John’s tenure as superintendent of the National Barrow Show, Myrna was active in building up and producing a three-day ladies program.

After John’s retirement from Hormel in 1987, he and Myrna enjoyed many pursuits. Antiquing, collecting Hallmark ornaments, traveling overseas, attending jazz festivals, and entertaining friends were things they loved to do. Myrna was well known for her love of family, her extensive knowledge of literature, keeping a beautiful house, needlework, listening to music and always presenting an impeccable appearance.

Myrna was preceded in death by her parents, Homer and Letha Dunwoody; her sister, Shirley Clements; and six sisters and two brothers of her husband John and their spouses.

A memorial service will be held at 11 a.m. on Monday, Oct. 30, at Westminster Presbyterian Church with the Rev. Michael Olmsted officiating. Visitation will be at the church on Monday one hour before the service..

Memorials may be designated to Westminster Presbyterian Church or the donor’s choice.