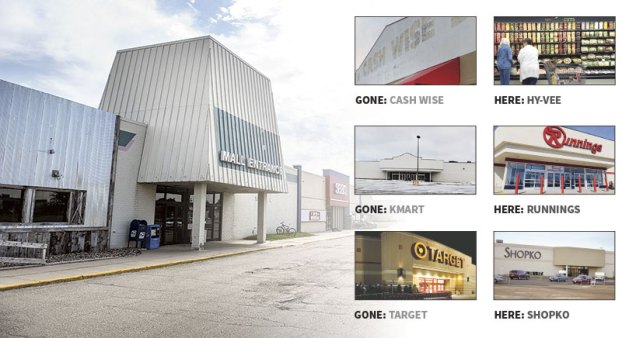 Austin struggles as shoppers opt to travel; City competes with neighbors in a 40-mile radius for customers, retailers

THE STATE OF LOCAL RETAIL: The Austin Daily Herald will be examining the state of Austin’s retail sector as the biggest shopping days of the year get closer.

A lot has changed to Austin retail in recent years, but key factors remain unchanged.

Businesses come and businesses go. Ten years ago, Austin housed a Target and a Staples, and years before that, a Kmart, a Cash Wise and, years ago, a thriving mall.

All are gone now.

Today, Austin has a larger Hy-Vee and others like Shopko, Walmart and Runnings anchoring its 18th Avenue Northwest retail sector.

Austin’s unwavering retail challenge: It sits about 20 miles east of Albert Lea, about 32 miles south of Owatonna and about 40 miles west of Rochester.

“It compresses the trade area that Austin can pull from,” said Jennifer Hawkins, a University of Minnesota Extension educator.

Austin has shown positive signs in retail, but challenges remain. From 2008 to 2015, Austin’s taxable retail and service sales increased almost 20 percent with 13 percent of that growth coming the last three years on record, increasing from $140 million in 2012 to $158 million in 2015, according to the Retail Trade Analysis Report .

The report was compiled this year by the University of Minnesota Extension for the year 2015, the most recent year data was available.

“While Austin’s retail and service sales have increased over the past three years, they are about 20 percent, or $38 million, below estimates expected for a community of its population,” the report states.

General Merchandise, Eating & Drinking and Food & Groceries represent the bulk of spending, or $88 million of the $158 million of Austin’s 2015 sales.

General Merchandise alone, which includes dollar stores, department stores and super stores, made up 25 percent of sales and showed growth.

“Sales for this category are up from virtually zero 10 years ago and have a strong pull factor of just over 1.4,” Hawkins said.

That’s impressive considering Austin’s Target closed after about a month into 2015. Extension’s Bruce Schwartau was surprised general merchandise sales were as good as they were for 2015.

“My hat’s off to Austin for keeping that amount of general merchandise for Target having closed,” said Schwartau, Extension’s program leader for community economics.

Still, despite some positive signs, taxable sales when adjusted for inflation have remained relatively stagnant at $150 million, the same level as that seen in 1990. And, the number of Austin retail firms decreased from 409 to 369.

Austin Area Chamber of Commerce Executive Director Sandy Forstner said Austin has fewer retail outlets than its neighbors — Albert Lea has 435 and both Owatonna and Winona have more than 550. And, he said, those commercial properties pay the highest rate of property taxes.

“(So) as we lose these businesses — and we are losing them — we lose our tax base, retail selection and jobs,” Forstner said.

Forstner expressed the importance of retail and business to the Mower County Board of Commissioners earlier this year when speaking against a half-cent sales tax for roads and bridges, which passed despite opposition from the business community.

But most measures tell the same story: Austin, and in turn Mower County, lose shoppers to other communities.

“We lose 37 percent of expected retail sales here in Mower County,” Forstner told the county board. “That’s equivalent to losing 14,000 residents — roughly everybody outside the city of Austin. That’s a big deal.”

Many believe the reason Austin is underperforming is its location.

A town with a pull factor below 1.0 is losing its shoppers to other communities.

“It is going in a positive direction,” she said.

To people in the know, Austin’s challenges to draw shoppers offer few surprises. Austin’s location makes comparing it to neighbors Albert Lea, Owatonna and Winona an apples to oranges comparison.

Austin’s pull factor lags behind Albert Lea’s 1.12 and Owatonna and Winona’s 1.17. Simply put: Those communities are drawing shoppers, while Austin is losing shoppers.

“These data would indicate that Austin is underperforming compared to communities of similar size in the region,” she said.

An apples to apples comparison puts Austin up against cities like Hastings, Faribault and Northfield — all cities situated between competing retail centers.

Faribault’s pull factor is 0.87, while Hastings’s is 0.68 and Northfield is 0.61. When compared to other cities between retail hubs, Austin compares more favorably.

“Austin’s performance is in line with these similar cities,” Hawkins said.

Extension data also gives information on the types of retail Austin could support, noting a potential restaurant and clothing store would fit near the old Hy-Vee on 18th Avenue Northwest.

The new Hy-Vee will bring some potential to draw customers based on the new store, but all the big neighboring retail centers also sport Hy-Vee’s. But Schwartau noted Hy-Vee does a lot of things right.

“You’ve got a little bit of potential for people,” he said.

The retail trade analysis can provide a key tool moving forward for Austin and Mower County, as it breaks down retail by category to show various merchandise groups and which are strong, pulling shoppers, losing shoppers, and performing above or below expected sales.

Clothing in Austin was also 40 percent below expected sales.

This shows these are possible areas of growth for Austin; however, it’s not that simple.

For many years, rumors circulated about Menards coming to Austin; however, Schwartau noted Austin has a Home Depot in both Albert Lea and Rochester, so the market may be too pinched for one to materialize.

Austin mother sentenced to prison; Woman had more than $154K in meth in her possession