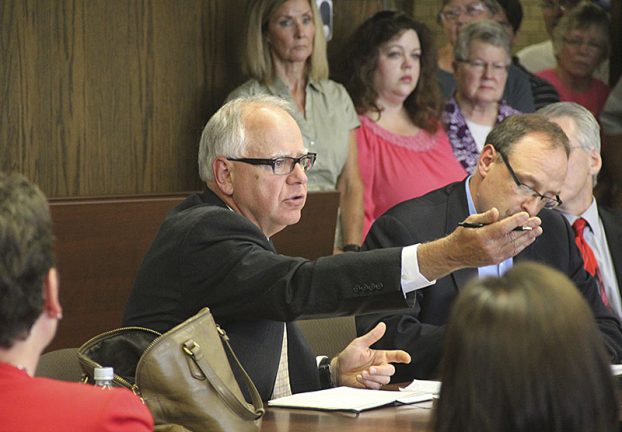 First District Rep. Tim Walz on Monday jumped into the controversy surrounding Mayo Clinic’s plan to move Albert Lea’s inpatient medical services to Austin, telling Mayo Clinic Health System-Austin, Albert Lea CEO Mark Ciota, “You have a community in turmoil who does not trust the words coming out of your mouth.”

After a town hall meeting, Walz — who is a candidate for governor — District 27A Rep. Peggy Bennett, R-Albert Lea, and two representatives from the Save Our Hospital group met with Ciota.

Walz expressed concerns aired at the meeting, particularly with how the consolidation decision was made and how Albert Lea citizens were not asked for input into the decision before it was announced.

Ciota said in June that 95 percent of services would remain at both locations, including emergency care, primary care, including pediatrics and pre-and post-natal services; specialty care such as orthopedics, cardiology, endocrinology and neurology, outpatient services and procedures, and laboratory, radiology and pharmacy.

The congressman said there was a belief in the community that Mayo’s decision had been made and that nothing would be done to change it. Ciota said he was getting “clear indications” that Mayo was moving forward with the plan along the previously announced timeline.

“I would really re-think that,” Walz said.

Later, Walz said he sent a letter to Mayo Clinic CEO John Noseworthy, that took Mayo to task for its handling of the announcement in June.

“Mayo’s failure to fully and proactively engage the Albert Lea community on this decision is disappointing,” Walz wrote. “Hospitals — like our schools and small businesses on Main Street — are the lifeblood of rural America and small town. I urge you to give my constituents’ concerns and ideas your full and fair consideration.”

Walz said for such a large issue, he believes the public needs to be heard, and he intended to express the concerns of his constituents.

“Trust is strained or gone for many of you,” he said during the meeting.

A standing-room-only meeting at Albert Lea City Hall included representatives from the Minnesota Nurses Association and Service Employees International Union, leaders of the Save Our Hospital initiative, local officials and other residents. Many in attendance wore T-shirts with the message  of “Save Our Hospital,” while others carried signs.

Some said they did not know of the planned changes until Mayo officials made the announcement and that they were disappointed they did not have a chance to provide input. They said there is also much data and answers that still need to be provided about the decision.

Mariah Lynne, co-chairwoman of Save Our Hospital, said she thinks what happens with Albert Lea’s hospital is a pivotal moment for Greater Minnesota, and she asked for Walz’s help amplifying the community’s voice.

Albert Lea resident and retired business owner Al Arends, who is overseeing the fundraising committee for Save Our Hospital, talked about the higher health insurance premiums Freeborn County faces, adding the rates make it difficult to be attractive to industry and businesses.

Walz asked Arends when he had first heard about Mayo Clinic Health System’s announced changes. Arends said there have been little changes in recent years that led up to the big announcement in June.

Several Save Our Hospital leaders discussed the lack of an economic impact study before the decision. Others talked about young families and retirees who recently moved to the community.

“You take (the hospital services) away and you’re going to have devastation in our community,” said Jean Eaton, former Albert Lea mayor and chairwoman of public relations for the Save Our Hospital group.

Mary Turner, president of the Minnesota Nurses Association, said nurses are on the front line in the fight for hospital services.

“This is not the time to be closing off health care access to people,” Turner said.

Albert Lea City Manager Chad Adams said city leaders have asked for several different metrics of data from the hospital system about economic and job-related changes, and they were told by Mayo leaders that they didn’t know the answers to those questions yet.

Adams said he and Mayor Vern Rasmussen, who has recused himself from decisions tied to the issue because of his employment as a physical therapist with Mayo, had met with hospital leadership regularly in recent months but were “blindsided” by the decision.

Freeborn County Attorney David Walker said the community needs facts about the effects of the decision. He said he has reached out to the Attorney General’s Office and has been exploring the documents and bylaws from when Mayo Clinic Health System first took over the hospital in 1995 and when there were changes in 2011 and 2013. He is also looking into whether they were anti-competitive practices that took place.

He said he has never seen emotions run as high during his time in office as they are right now in the Albert Lea community with the reaction to Mayo’s announcement.

Ciota said he, too, has taken the changes personally as he has lived in the community for many years and raised his family here. He said he would have been disappointed if residents did not respond the way they have.

He briefly discussed why the decision was made, including the difficulty in hiring physicians.

He also said the number of patient days in the hospital is decreasing. Of the 50 beds at the Albert Lea hospital, there are no more than 12 to 15 patients in them each day. The hospital is down to having about one baby born every day, which is down from about two or three a day.

Walz, in his letter to Noseworthy, said he was standing “ready to do whatever I can at the federal level to be a partner with you and the good people of Albert Lea in finding alternative and acceptable solutions.”