Austin sophomore Colie Justice is hoping the work she has put into her passion for basketball pays off for a young Packers team in the coming years. Eric Johnson/photodesk@austindailyherald.com

For Colie Justice, basketball is much more than a sport — it’s a passion.

Colie, who played point guard for the Austin girls basketball team this last winter as a freshman, has been around the sport her entire life. Both of her parents played basketball for Austin High School and both of her older siblings — Steph and Nate — also played for the Packers.

Throughout the years, Colie has received plenty of advice from her parents and siblings and she’s glad to keep the family tradition alive on the hardwood.

“It’s fun to keep it going,” Colie said. “I get advice all day, every day from all of them and [Nate and Steph] always cheer me on when they come home. That’s nice.”

Colie has undergone a bit of trial by fire for the Packers as she saw a little bit of varsity playing time as an eighth grader and she started as a freshman. She had a whirlwind season last year that was highlighted by her hitting game-tying half court shot in Mankato East. She finished the year averaging 11.2 points and 1.8 steals per game.

Colie was almost always the smallest player on the court last season, but she didn’t back down from competition. 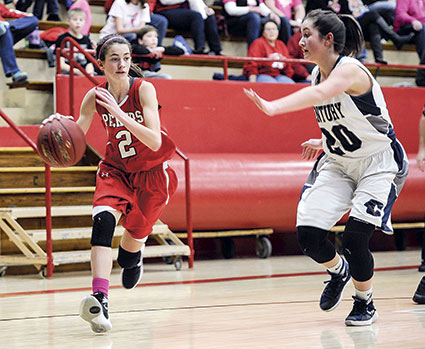 Austin’s Colie Justice moves the ball into the corner against Rochester Century’s Haylee Crosby during the second half this past season. Herald file photo

“I’ve always been the smallest one, so I’m used to it. Sometimes it can be intimidating, but you just keep doing what you can do,” Colie said. “Everyone was really nice and welcoming, but you’ve just got to keep working hard and show them what you’ve got. It was a big step up, but you keep working hard in the summer and the offseason and it pays off.”

While she found some success on the court this past season, Colie has not settled and relaxed this summer. She has been playing AAU with the Minnesota Fury, she practices and plays with the Packer summer team, she attends the Packer strength and conditioning camp and she has competed in volleyball offseason activities. Colie is hoping to move on and play college basketball after high school like her dad Steve, who played at the University of Wisconsin-River Falls.

“It’s crazy to think of,” Colie said. “I still feel like I should be young, but it’s definitely something that I think about a lot. I’m just trying to get my name out there. You get nervous before the games, but you just play your hardest and they can see that.”

When Colie takes the court as a point guard for the Packers this winter, she’ll be in a leadership role for a team that has a new head coach in Eric Zoske. She is ready for the challenge and she’s ready to keep improving over this summer.

“I try to be a leader and have everyone be on the same page. We all work well together,” Colie said. “I just love basketball. The girls are fun, it’s always a good time and I enjoy being in the gym.”