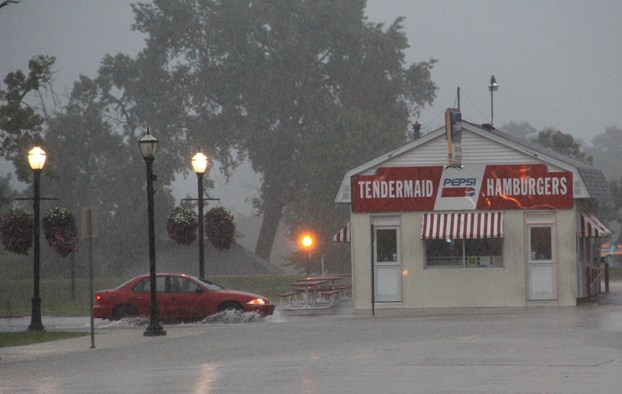 A car passes through standing water near the Tendermaid in this 2017 photo. Rain predicted Tuesday into Wednesday could bring flash floods as Mower is currently in a flash flood watch. Herald file photo

Austin had a soggy start to its Friday.

Mower County was under a flash flood warning for a few hours as a strong storm system brought downpours to the Austin area and left 1.77 to 3.23 inches of rain around Austin, depending on the location, according to The National Weather Service.

The heavy rains caused concerns because many soils were already saturated from recent rains, the weather service said. Some street flooding was reported in Austin.

The heaviest parts of the morning storm hit from Austin south to Fayette, Iowa.

After early downpours, rain continued on and off until the early afternoon, but a second round of storms in the afternoon largely tracked south into Iowa.

COLUMBUS — The National Weather Service has confirmed storm damage in the Columbus and Forest Lake area was caused by... read more