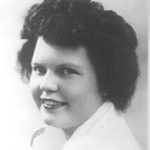 Vern was born on Sept. 27, 1921, in Litchfield, Minnesota, the first of four children, to parents Marie and Leslie Hildreth. She was raised in and around Spirit Lake, Iowa. She moved to Austin with her family as a high school senior, but never forgot her classmates of the previous 12 years. For years she looked forward to the good times when they got together for school reunions. She told many stories about her wonderful friends and her life in Iowa. She always claimed her Class of 1939 was the best and brightest.

Vera enlisted in the U.S. Marine Corps in 1942 and was stationed in El Centro, California, for the duration of the war. There she met and married another young Marine far away from home, Millard Lee Pace. They had a daughter together, Alice Pace Talbott, but divorced soon after the war.

Vera was a resident of Austin from 1945 until her move to St. Paul, Minnesota, in 2008 to be near her sister, Alice. She had a variety of jobs in her many years in Austin. One of her most memorable and life-changing was a job at the Hormel plant just after World War II. It proved she had the strength and willingness to work hard and succeed. She soon enrolled in a two-year teaching course and ended up teaching in a one-room schoolhouse in the countryside of Mower County. Vera took advantage of the GI Bill two years later and was off to college to pursue a degree in teaching. She got her bachelor’s degree at Iowa State Teacher’s College and her master’s degree in teaching from Minnesota State University at Mankato, Minnesota. She taught in the Austin Public Schools as a first-grade teacher for a number of years before going back to college, this time at the University of Minnesota to pursue her interest in library science. After earning another master’s degree, she joined fellow teacher and friend, Margaret “Becky” Beck, and the two became Austin’s first elementary school librarians. They wrote a series of books on introducing elementary children to the library during their years together. The last job Vera held before retiring in 1981 was to set up a library for post-high school students at the Austin Area Vocational Technical Institute.

In 1980, Vera married Mort Carney, a long-time acquaintance and teacher and administrator in Austin schools. They had many wonderful times together, traveling, spending time with family, entertaining friends, gardening and yard work, bicycling, hiking through the Hormel Nature Center and just enjoying being together. Sadly, Mort died in July 1986, but Vera held many fond memories of their time together in her heart.

At the age of 80, in 2001, Vera decided to sell her house and move to an apartment in downtown Austin. Here she continued to visit friends and enjoyed being near the Elder Center, where she took many classes.

She moved again in 2008, to be closer to her sister, Alice, and many of her nieces, nephews, and their families. She made new friends at her independent living apartment, Summerhouse in Shoreview, Minnesota, and moved again, this time reluctantly, in 2015, to an assisted living facility some time after her sister moved there.

After Vera’s beloved sister, Alice, died in February 2016, she again reluctantly moved, this time to Portland, to be closer to her daughter, Alice. She was in a memory care facility there when she died.

Vera is survived by her only child, Alice Pace Talbott; her three grandchildren, Rebecca (Christopher Black) in Arizona, Benjamin (Ashley Lindberg) in Oregon, and Edward (Allison) and their family of three (her great-grandchildren) Cailyn, Colby and Camryn Jade, in southern California; her sister, Mary Herrick; and 12 loving nieces, nephews and their children and grandchildren. She was preceded in death by her parents; brother Leslie (wife Naomi); her sister, Alice Tedrow (husband, Richard); her brother-in-law, Robert Herrick; and her husband, Mort Carney.

Vera was a special lady and will be missed by all. The family hopes to share some of their favorite memories at her memorial service on July 1.

Her daughter, 12 nieces and nephews, three grandchildren and three great-grandchildren will meet with friends and family during a celebration of life at 10:30 p.m. on Saturday, July 1, at the First United Methodist Church in Austin. A lunch will be served at the church following the service. Interment will be at 1:30 p.m. at Oakwood Cemetery.