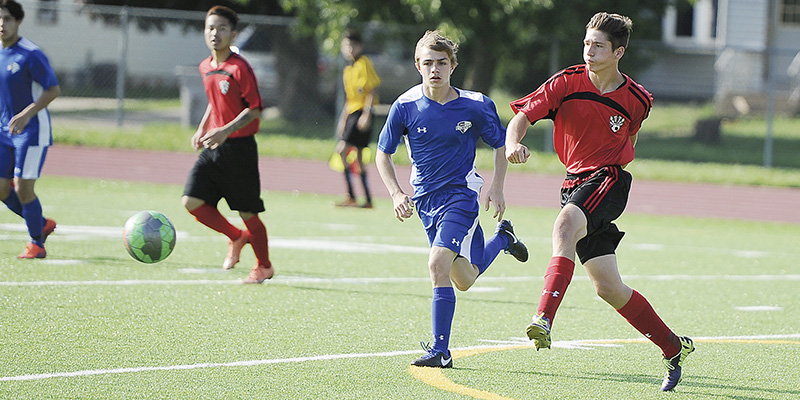 Austin’s Sam Bailey passes the ball during the first half against Owatonna in U18 boys soccer action Wednesday night at Wescott Athletic Complex. Eric Johnson/photodesk@austindailyherald.com

The Austin boys U18 soccer team was shorthanded, but not short on motivation when it faced off against Owatonna in Wescott Athletic Complex Tuesday. Austin was missing five of its starters and one of its top scorers had to move to keeper, but Sam Bailey picked up the slack as he netted a hat trick and Austin beat Owatonna 4-0.

Bailey scored two goals in the first half as he was able to get near the net and fire. His third goal came early in the second half on a point blank look, and when he had his attempt at a fourth goal blocked, it was knocked in by Caleb Simerson on a rebound. 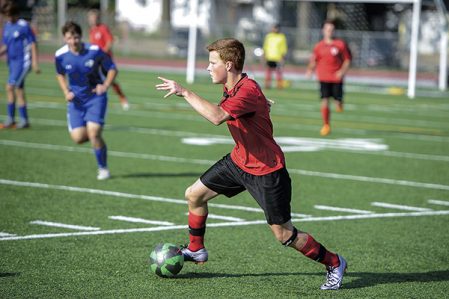 Austin’s Caleb Simerson moves along the edge during the first half against Owatonna Wednesday night. Eric Johnson/photodesk@austindailyherald.com

“Over the offseason, I’ve worked on a lot of stuff and I just took it to them tonight. I was dribbling more than passing,” Bailey said. “We’ve improved a lot this summer as a team.”

While Bailey was creating offense for Austin (7-2 overall), Victor Velazquez was holding his own between the posts in the net. Velazquez was filling in for Josh Brehmer, who was recently injured, and he stopped all nine of the shots he saw. It was Velazquez’s first action in net in a couple of months.

Ben Jacobs fends off pressure during the first half against Owatonna Wednesday night at Wescott Athletic Complex. Eric Johnson/photodesk@austindailyherald.com

“I wasn’t adjusted to [playing keeper] going into it, but I’m kind of getting back in the groove,” Velazquez said.

Austin, which had 19 shots on goal, was tied at halftime the first time it played Owatonna with its full squad, but Austin was much more effective on Wednesday.

“I think we have a pretty talented group and when we play together, it’s beautiful,” Velazquez said.

Deng Kuir had one assist in the win for Austin. 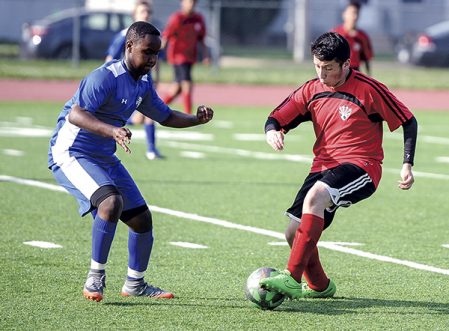 Austin’s David Ruiz controls the ball during the first half against Owatonna Wednesday night at Wescott Athletic Complex. Eric Johnson/photodesk@austindailyherald.com