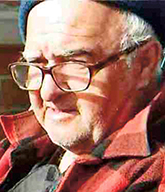 Roger was a member of St. Augustine Catholic Church. He worked at SPX for 30 years, retiring in 2007. After retirement he enjoyed time with family and visiting people while out riding on his scooter.

He was preceded in death by his parents; his wife, Pat; brothers, Ronald, David, Jim, Donald and Bobby; and sisters, Delores and Darlene.