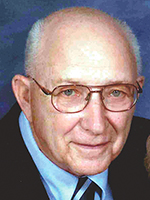 Bob was born Feb. 27, 1930, in Austin, to Forrest “Emmet” and Edna (Crilly) Thomas. He grew up in Austin and graduated from St. Augustine (Pacelli) High School.  Bob enlisted in the U.S. Army in 1948 and served in Fort Monmouth, New Jersey, and Germany. While stationed in Germany, he was manager of the NCO Club. Bob was discharged in 1952.

On Feb. 14, 1953, he was united in marriage to Donna Herr at St. Augustine Catholic Church in Austin. Bob worked at Hormel Foods for 39 years and retired in 1986.

He was a member of Queen of Angels Catholic Church, the Knights of Columbus, American Legion, and formerly the Eagles and the Moose. Bob enjoyed camping, traveling to all 50 states, Canada, and Europe. He was a member of the Hitchhiker Voyageurs Camping Club of Minnesota and at one time, sang with the Northwest Singers, Queen of Angels Choir and more recently with the Oaks Trio and the Young Oldies.

He is preceded in death by his parents; and brother-in-law, LaVerne Adams.

A memorial Mass will be celebrated at 11 a.m. on Thursday, June 22, 2017, at Queen of Angels Catholic Church with Father Raul Silva officiating. Friends may call one hour before the service at the church on Thursday. Interment will be in Oakwood Cemetery with military rites by American Legion Post #91.

A special thanks to the staff at Our House and St. Croix Hospice Care.