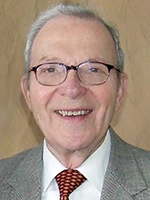 He was born Aug. 30, 1926. The family lived on a farm near Litchfield, Minnesota, which was lost because of the 1930’s economic depression. The family then moved to southeast Minneapolis, Minnesota.

When World War II began, Ray voluntarily joined the U.S. Navy in 1943 and served for almost four years. He was stationed in the South Pacific where he participated in five invasions and battle operations for which he was awarded three Bronze Battle Stars. His last battle operation was in Okinawa. He was honorably discharged in the fall of 1947.

On Sept. 15, 1951, Ray married the most gracious and loving Muriel D. Kvitrud. They were married more than 62 years. Muriel died on May 30, 2014. God blessed them with three wonderful children, Charles, Rebecca, and Julie.

Ray graduated from the University of Minnesota Law School in June 1954. He and Muriel moved to Austin, Minnesota, where Ray practiced law for 38 years with the firm of Alderson, Ondov, Leonard & Sween.

Ray was always a strong supporter of his hometown, Austin, and his church. Ray deeply loved his God, his wife and children, his family and Muriel’s family. In April of 2017, at 90 years old, Ray started on a new adventure. He moved to Hamilton, Montana, to live closer to his children. They enjoyed sharing together the last couple months of Ray’s life.

He was preceded in death by his wife, Muriel D. Ondov; his parents, Michael and Bertha; his brothers Harold, John, Emanuel, and Daniel; his sisters Leona Baluha, Mildred Bucholz, and Ruth Morrissey.