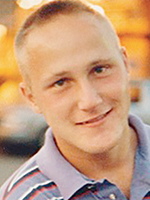 George was born Aug. 20, 1963, in Austin, Minnesota, to Kenneth and Darlene Ashton. His family moved to Albert Lea, Minnesota, in 1968. George is a 1982 graduate of Albert Lea Senior High School and joined the U.S. Army in August that same year. George started his career in the Army as a medical supply specialist and later reclassified to communications electronic maintenance supervisor.

While stationed at his first duty station, Ft Bliss in El Paso, Texas, he met and married another soldier, Kathy Williams of St. Louis, Missouri, on Feb. 14, 1986. George and Kathy had two children: Anja Aimee in 1987 and Kenneth John in 1989. Together the family would serve tours at Camp Humphreys, Korea, Fort Campbell, Kentucky, Geibelstadt Army Air Base, Germany and Fort Huachuca, Arizona.

While stationed at Fort Huachuca, George came to know Jesus as his Savior and was baptized along with his wife Kathy on June 4, 1994. George and Kathy served the Lord as a team in the children’s ministry at Thunder Mountain Community Church, Sierra Vista, Arizona, and Christian Fellowship Church, Columbia, as well as the Christian Motorcycle Association, where George was known as “Dudels” the motorcycle clown. Later they served with the Living Waters Ministry at Christian Fellowship Church, where George’s testimony of the Lord’s faithfulness to him helped lead many to healing and wholeness.

He retired from the U.S. Army in August of 1998 from Camp Humphreys, South Korea, as a Sgt. First Class and the family moved to Columbia. After retirement, he worked for Boone Hospital Center, holding positions in security, pharmacy and medical records at Columbia College as a military services coordinator and serving the public servants coordinator, at Veterans United Home Loans as an internal auditor, and finally at Harry S. Truman Memorial Veterans Hospital as voucher auditor. George also owned his own home business as a notary signing agent and, at the time of his passing, was enjoying working as “George the Uber Driver.” George was a graduate of Columbia College with a Bachelor of Science degree in Business Administration.

A private family service will be at Memorial Funeral Home, and the burial with full military honors will follow in Memorial Park Cemetery in Columbia. A public memorial service will be held later at Christian Fellowship Church.

Online condolences may be left for the family at www.memorialfuneralhomeandcemetery.com.