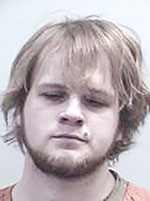 A 21-year-old Austin man charged with selling drugs to a 20-year-old who died from an overdose is headed to prison.

The sentence comes after he reached a plea agreement in March after originally being charged with third-degree murder. He’ll receive credit for 395 days already served and must pay $13,660.82 in restitution.

According to court records, Austin police responded to a report a 20-year-old man’s death at around 12:43 p.m. on March 27, 2016. They confirmed he was a heroin user and that he used heroin three days earlier.

The victim had arrived at a relative’s house at about 9 p.m. the previous night, but he was falling asleep and showing signs he was not capable of riding his bike home. The relative walked him back to another relative’s home and told him he needed treatment, according to court records.

The autopsy lists the cause of death as “acute heroin and methamphetamine toxicity.”

On May 2, 2016, officers interviewed Flugum, who gave details about how the victim contacted him on Facebook looking for heroin. He and the victim exchanged a 55-inch smart TV with a runner for about $200 worth of heroin.

After obtaining the heroin, the victim and Flugum used heroin in the car. Later, Flugum reportedly went to a house in northeast Austin, where the victim showed signs of an overdose but recovered enough to go home. Flugum and another man reportedly took his remaining heroin and told him not to drive.

Flugum told officers he thought the victim used about a quarter gram of heroin on March 26. He also agreed with the small amount the victim had left, he would not need to use again until at least the next morning.

Flugum’s was one of two cases tied to a heroin overdose in Mower County. Ryan Allen Anderson, 24, was sentenced to four years in prison earlier this year for second-degree manslaughter, which he’ll serve with a concurrent five-year prison sentence for felony second-degree sale of a narcotics in a school zone.

Flugum was also charged with financial transaction card fraud and theft, both felonies, for allegedly stealing more than $13,700 from a relative in a separate 2016 case.