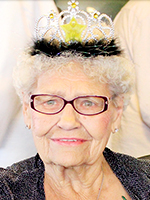 Della and her children ran “The Hub” restaurant in Austin for many years.