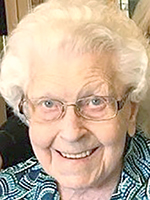 Clarice was born May 11, 1915, in Fillmore County, Minnesota, the daughter of Joseph and Celia (Hesby) Holland. She was baptized and confirmed at Scheie Lutheran Church in rural Mabel, Minnesota, and attended rural school in Fillmore County. During World War II, she was one of the “Rosie the Riveter Girls” when she worked at Douglas Aircraft in Long Beach, California. Clarice married Lennie Faa on April 19, 1947, at La Crosse, Wisconsin, and moved to Austin, where they became members of St. Olaf Lutheran Church.

She was preceded in death by her parents; husband, Lennie in December 2006; four brothers; and two sisters.

Funeral services will be held at 1:30 p.m. on Wednesday, June 14, at St. Olaf Lutheran Church with Todd Portinga, AiM officiating. Interment will be at Grandview Cemetery. Visitation will be at the church one hour before the service.

Memorials may be designated to the St. Olaf Lutheran Church Building Fund.