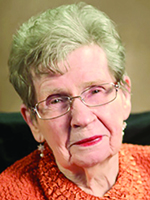 Bernice Lingbeck, 92, of Shakopee, Minnesota, passed away peacefully with her family by her side on June 8, 2017.

On Nov. 10, 1924, Bernice Carllie Ada Schmidt was born to Herman and Amanda (Poeschel) Schmidt. Bernice enjoyed growing up on the family farm near Spring Valley, Minnesota. As a girl, she liked spending time raising her own calf, cleaning and shucking black walnuts, and making homemade ice cream in their old wooden ice cream maker.

After graduating from high school, Bernice completed normal training and began teaching in a one-room schoolhouse. Not only did she teach first through eighth graders, but she also had to arrive at the school bright and early to get the stove going so it would be warm for the children. Bernice enjoyed being a teacher and spending time with the children.

One evening Arlin’s aunt Hazel, who lived in Spring Valley, invited Bernice to her house for dinner. She had a plan to set Bernice up with her nephew. It worked, and Bernice and Arlin hit it off immediately. Their love grew quickly, and they exchanged wedding vows on Nov. 17, 1946. They settled in Austin, Minnesota, where Arlin worked for Hormel, and they led a very traditional life. Bernice gave up her teaching job to become a homemaker, and she always enjoyed getting together for a good cup of coffee with the women in her Austin neighborhood. In October 1947, they were blessed with a wonderful daughter, Sharon.

As a family, they enjoyed vacationing on Lake Saganaga at the end of the Gunflint Trail near Grand Marais, Minnesota. In  the early years, they would pitch a tent on an island, fish, and explore the area with their Irish setter, Penny. Later, they liked the convenience of a cabin and became lifelong friends with the family who owned the resort.

Bernice had many hobbies. She was a wonderful baker and enjoyed making special birthday cakes in the shape of animals for her daughter and nephews. She was also very skilled at cross-stitching — one year taking first place at the Mower County Fair for her detailed work on a beautiful linen tablecloth and matching napkins. Bernice loved to stay in touch with friends and family and wrote many letters over the years. She was a loyal pen pal. In her later years, she enjoyed playing Scrabble, Canasta, doing jigsaw puzzles and word-find books with her family and special friends. Reading was one of her favorite hobbies, and she would spend many evenings enjoying her wide variety of books.

After Arlin retired, they moved north to Backus, Minnesota. They enjoyed 12 years of retirement together and traveled extensively during that time. In January 1993, Arlin passed away suddenly at home from a massive heart attack. Bernice missed him deeply, but she was a strong woman and persevered. Soon she left Backus to be closer to her family. Over the years, she lived in the Minnesota communities of Edina, Prior Lake, and finally Shakopee. She was a resident at St. Gertrude’s Health and Rehab Center since April 2013, and enjoyed being close to her daughter, grandchildren and great-grandson, Wil.

Bernice was a very classy lady, and she will be missed by many. She is survived by her daughter, Sharon (Gerry) Proskin; grandchildren, Steve Proskin and Emily (Bill) Benson; great-grandson, Wil Benson; brother, Dan (Lee) Schmidt; and other loving relatives and friends. Bernice is preceded in death by her husband, Arlin; parents, Herman and  Amanda Schmidt; and siblings, Paul Schmidt and Neva (Carroll) Winslow.