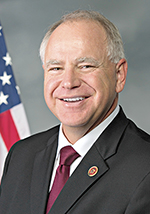 Walz said he will answer questions and talk about issues important to the citizens of First District. Walz has also announced his run for Minnesota governor in 2018.

One of the issues will almost certainly be the recent House passage of the Americans Health Care Act, and its impact on MinnesotaCare. Walz said according to the Minnesota Department of Human Services, the Republican bill would terminate all federal funding for MinnesotaCare on Jan. 1, 2020. The insurance covers more than 100,000 Minnesotans.

“Without any hearings, without any testimony, without a CBO score, and without the support of virtually all the major patient advocacy groups, House Republicans recklessly rushed this bill’s passage. As a result, over 100,000 of our fellow Minnesotans are at risk of losing their health insurance,” Walz said.

The bill has yet to be heard in the U.S. Senate.

“It’s still not too late for Republicans to stop this AHCA madness and work together with Democrats to improve our health care system for all Minnesotans,” Walz said. “I remain ready to work with my Republican colleagues on common sense improvements as soon as they are willing.”

MinnesotaCare serves working Minnesotans who are ineligible for Medicaid due to their income being above 133 percent of the Federal Poverty Line (FPL) but below 200 percent of the FPL.