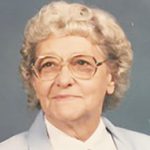 Phyllis was born in Estherville, Iowa, on April 14, 1924. She was the second of six children born to Bruce and Bertha Reed. She grew up in Hollandale, Minnesota, and graduated from high school in Albert Lea, Minnesota.

Phyllis and her brother, Veryl, were attending college in Mankato, Minnesota, when Pearl Harbor was bombed. Veryl immediately left for the service and Phyllis stayed and completed her teaching degree. Her first job was at a one-room school west of Oakland, Minnesota, where she taught first through eighth grades. She would shovel a path through the snow to the outdoor bathrooms and start the wood stove before the students arrived.

In March 1944, she rode a train to San Diego, California, where she married a local Hollandale boy, Meredith Cole, who was serving his country in the U.S. Navy.

Meredith and Phyl owned and operated Cole’s Grocery in Oakland for many years before selling the business. Phyllis worked in the store and kept the books. Later, Meredith had the Kirby Vacuum distributorship and Phyllis again kept the books.

Phyllis and Meredith enjoyed camping and hosted an annual pig roast event at their Oakland farm that drew family and friends from miles around. Phyllis enjoyed traveling with her husband and they were blessed with many opportunities to do so. They retired to Crystal Beach, Florida, in 1975 where Phyllis started a Sunday school class for children at the Crystal Beach Community Church. Their three children, David, Myrna and Don, eventually moved their families to Florida as well.

By 2010, as she became more frail, son David and his wife, Bonnie, moved her to an assisted living facility near their new residence near Asheville.

Memorial services will be held at 3 p.m. on Sunday, May 28, 2017, at Crane Community Chapel in Austin, Minnesota.