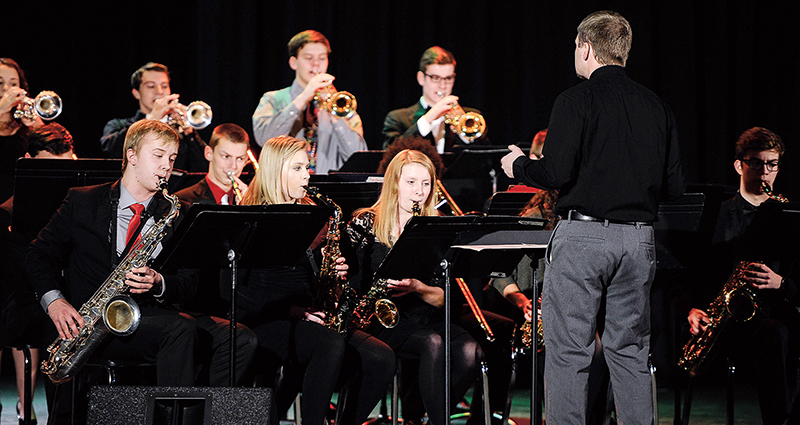 Austin High School Jazz One kicked off a performance earlier this year at the Paramount Theatre. Herald file photo

Spring has sprung, and over the next few weeks, the bands, choirs, and ensembles of Austin Public Schools will perform for the public at their end-of-year concerts.

Cost for high school performances is $5 for students and $7 for adults, and activity and music season passes are accepted.

Next week kicks off with the Ellis Orchestra performing at 7 p.m. Tuesday, May 16 at Ellis Auditorium. Then it’s time for the 47th annual Band Blast on May 18. The Band Blast, which will be held at 7 p.m at Austin High School’s Knowlton Auditorium, features five different bands performing music from “The Incredibles,” “The Lion King,” and “Pirates of the Caribbean.”  Get there early, at 6:30 p.m., to hear several AHS jazz groups perform in the lobby.

The AHS Spring Choir Concert on Wednesday, May 24, will feature a variety of music including multicultural songs, spirituals, gospel and pop, and will also recognize graduating seniors. The concert will be at 7 p.m. in Knowlton Auditorium.

Then, on Thursday, May 25, the fifth to eighth grade choirs will also perform at Knowlton.

The award-winning music program at Austin Public Schools provides many opportunities for students to express themselves both instrumentally and vocally, and this spring was no different. The AHS Concert Choir, Wind Ensemble, and Symphony Orchestra performed on April 28 at the Big 9 Music Festival in Red Wing. Each group had a 30-minute performance slot and received feedback from a clinician, and students spent the rest of the day listening to performances by ensembles from other schools.

The Big 9 Festival ended with a performance by the Big 9 Select ensembles, with guest directors conducting a select orchestra, band, and choir of top students from each of the 12 schools. Thirty-one AHS students represented our music department and school in the select concert.  Jazz One and Packer Jazz performed at the Eau Claire Jazz Festival on April 21 -22, where they got to hear Doc Severinsen perform with the University of Wisconsin-Eau Claire Jazz One on Friday night and perform for clinicians on Saturday.

AHS sophomore Wayde Hall performed in the MBDA State ninth – 10th grade honor band on April 22-23. He was one of 87 students selected out of 223 who auditioned in December.

La Fiera, an AHS chamber orchestra ensemble, held its first-ever Chamber Recital and Ice Cream Social on April 22 in Christgau Hall where the audience was treated to various solos as well as small ensemble and La Fiera performances.

So please join us this spring for some amazing music. Students and staff at Austin Public Schools work incredibly hard to create wonderful performances, and you will not be disappointed!