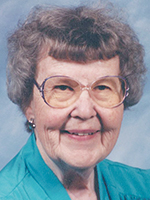 Marian Rita Welte was born Feb. 18, 1925, in Crookston, Minnesota, the daughter of Henry and Mary Jane (Malone) Welte. She graduated with the class of 1942 from Crookston Cathedral High School. She went on to attend the College of St. Catherine in St. Paul, graduating in 1946 with a major in Spanish and a minor in music. St. Catherine’s hired her to return in the fall to teach at the college as well as teaching Spanish for St. Catherine’s Prep School for Women at Derham Hall in St. Paul. She spent the summer of 1949 taking classes at Columbia and Julliard in New York. She continued teaching until her marriage to Robert J. Becker on July 29, 1950, at Nativity Catholic Church in St. Paul. The couple moved to Preston, Minnesota, before settling in Blooming Prairie in 1953. Marian began giving private lessons in her home in 1955 and continued teaching piano for over 40 years. Marian served as church organist for St. Columbanus Catholic Church for over 44 years. She retired after suffering a stroke in 2009, but continued to play for church services while a resident at Prairie Manor. Marian loved music, theatre, sewing, reading, playing cards (especially bridge), and following the Minnesota Twins. She was a faithful member of St. Columbanus Catholic Church and the CCW.

A Mass of Christian burial will be celebrated at 10:30 a.m. on Monday, May 15, 2017, at St. Columbanus Catholic Church in Blooming Prairie with the Rev. William Becker officiating, the Most Rev. John Quinn presiding, and priests of the Winona Diocese concelebrating. There will be a 3 p.m. CCW Rosary service, with visitation following until 6 p.m. on Sunday, May 14, at the Worlein-Blooming Prairie Funeral Home. Visitation will continue Monday morning, for one hour prior to the Mass at St. Columbanus.  Interment will be in St. Lawrence Cemetery in Faribault.  In lieu of flowers, memorials are preferred to St. Columbanus Catholic Church, St. Columbanus CCW, or Prairie Manor Care Center. Condolences may be expressed to the family online at www.worlein.com.