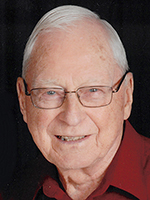 He was born April 25, 1917, at his home in rural Ostrander, Minnesota, the son of Laures and Kaia (Amdahl) Rendahl. Leo attended country school and graduated from LeRoy High School in 1935 before studying business for one year at Waldorf College. He married Eulah Highum on Sept. 7, 1941, in Ostrander. Eulah passed away Feb. 1, 1995. On June 3, 2000, Leo and Ardis Krejci were married at First Lutheran Church in Blooming Prairie. Leo served his country during World War II in the U.S. Army. He was drafted in 1942 and served in the South Pacific, earning the rank of staff sergeant. His honorable discharge was in December 1945. Leo was a very hard worker. Following school, he worked at a chicken hatchery in Spring Valley, Minnesota, then purchased a hatchery in Ostrander with his brother Vernon. After serving in the Army, Leo and Vernon, along with brother-in-law Burton Highum and brother Walter, started an agri-business, Rendahl and Highum, in Spring Valley. In the early stages of the business, his brothers Vernon and Walter left the business to farm. Burton died in 1972 and Leo continued to operate the business until his retirement in the 1990s when the business was sold. Leo was a great father, grandfather, great-grandfather, and a good provider who was very proud of his Norwegian heritage. He never forgot a birthday — everyone got a card from him. Leo believed in faith, family and friends. His children could always count on him for anything. He enjoyed “coffee” with the group in Spring Valley and was an avid sports fan. He followed the Minnesota Twins and was a Vikings season ticket holder. Leo belonged to the Spring Valley Kiwanis club for over 50 years, the American Legion, and served on the board of directors at Home Federal Savings Bank in Rochester, Minnesota. He was a very active past member of Our Savior’s Lutheran Church in Spring Valley, serving as president of the congregation and singing in the choir. Most recently, Leo was a member of First Lutheran Church in Blooming Prairie. Leo enjoyed fishing in Lake of the Woods, traveling, especially trips to Europe and throughout the United States, and doing crossword puzzles. He wintered in Arizona for many years beginning in 1978.

Funeral services will be held at 10:30 a.m. on Saturday, May 20, 2017, at First Lutheran Church in Blooming Prairie with Pastor Heidi Heimgartner officiating. Visitation will be held for one hour prior to the service at the church. Interment will be in Our Savior’s Lutheran Cemetery, Spring Valley.

Memorials can be directed to First Lutheran Church in Blooming Prairie, Our Savior’s Cemetery in Spring Valley, or recipient of donor’s choice.

Services are prearranged and performed by Worlein Blooming Prairie Funeral Home. Condolences may be expressed to the family online at www.worlein.com.