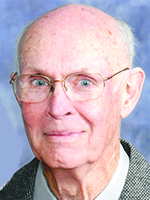 He was born April 17, 1935, in La Crosse, Wisconsin, the son of E. L. Ashley and “Lee” Ashley. Larry moved to Austin at the age of 5. He attended Austin Public Schools, and then graduated from Austin Central High School in 1953. After graduating high school, Larry attended the University of Minnesota and St. Olaf College in Northfield, Minnesota. On Aug. 22, 1959, he married Patricia Ann Murnane in St. Paul, Minnesota. Patricia died March 14, 1985. On Aug. 28, 1988, he married Deanna Cooling at St. Olaf Lutheran Church in Austin. When his father was ill, he moved back to Austin to oversee the Ashley Distributing Company. Later, Larry bought the company from his father and ran a successful business until he “retired” in 1985. Afterward, he worked as a shipping and receiving manager at local businesses. He was an active and involved member of St. Olaf Lutheran Church. He will be dearly missed by his family and friends.

Funeral services will be held at 11 a.m. on Friday, May 26, 2017, at St. Olaf Lutheran Church in Austin with Pastor Susan Li officiating. Friends may call from 4 to 7 p.m. on Thursday, May 25, at the Worlein Funeral Home in Austin, and for one hour prior to the service at the church on Friday. Interment will be in Oakwood Cemetery. Memorials are preferred to Alzheimer’s research or recipient of donor’s choice. Worlein Funeral Home of Austin is assisting the family with arrangements. Condolences may be expressed to the family online at www.worlein.com.