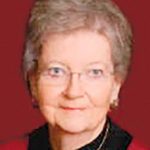 Gloria Himle, 84, of Hutchinson, Minnesota, formerly of Hayfield, Minnesota, passed away Thursday, May 11.

She was born March 14, 1933, and married to Earl Himle. Gloria was a caring and devoted wife, mother and grandmother and a true friend to many. She always carried a sense of style, even into her later years. And she had many musical talents, including the gift of perfect pitch. Family and friends enjoyed her dry and nuanced sense of humor.  Gloria had the uncanny ability to extract uncommon insights from common events which was best expressed in her many notes/cards and annual Christmas letter, which developed a large following over the years.

She is survived by children, John (Karen) and Karen Westlund (Dave); grandchildren, Lauren and Kirsten Himle and Dan, Laura and Alec Westlund. She was preceded in death by husband, Earl; parents, Ordean and Stella Dahle; and sister, Gwen.

A memorial service will be held at 11 a.m. on Monday, May 15, at Faith Lutheran Church, 335 Main St. S., Hutchinson. Visitation will be held from 4 to 7 p.m. Sunday at the Dobratz-Hantge Chapel in Hutchinson and one hour prior to the service at the church.